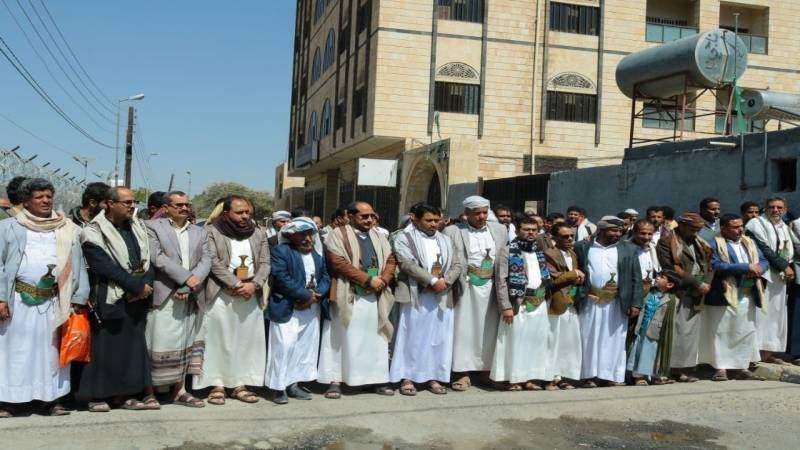 The Yemeni Petroleum Company (YPC) organized, on Friday, a rally in front of the United Nations headquarters in Sana’a under the slogan “Piracy on fuel ships is a comprehensive crime partnered by the UN.

The protest denouncing the continued detention of fuel tankers by the Saudi-led coalition of aggression.

The participants at the rally, in the presence of the company’s executive director, Eng. Ammar Al-Adra’e denounced the international silence toward the crimes of the Saudi aggressors and their prevention of fuel tankers from entering the port of Hodeidah.

In a statement, the YPC indicated that the continued prevention of fuel to the country will lead to a humanitarian catastrophe as a result of the stopping of most of the service and vital sectors of health, transportation, electricity, water, agriculture, and man other essential services that citizens need.

The executive director of the company explained to the press that the US-backed Saudi-led coalition is still holding 12 ships of oil derivatives and is preventing their entry to The Hodeidah Port, even though these ships have obtained permits from the United Nations after they were subjected to the verification and inspection mechanism.

Al-Adra’e pointed out that these tankers are being seized at the Saudi port of Jizan, some of them have been detained for more than nine months, which incurred many fines to Yemen and caused additional costs for the Yemeni people.

“We issue an urgent humanitarian call for help to all peoples of the world to intervene to release fuel ships, lift the blockade on the port of Hodeidah, and work to prevent a humanitarian catastrophe threatening the Yemeni people as a result of the cessation of many service sectors from providing vital services to citizens,” he said.

Al-Adra’e pointed out that the current capabilities of all service sectors in the country are threatened to stop in the coming days, blaming the United Nations for providing cover for the Saudi coalition.

Real Peace Will Not Be Before Ending the Aggression, Siege on Yemen: Abdulsalam