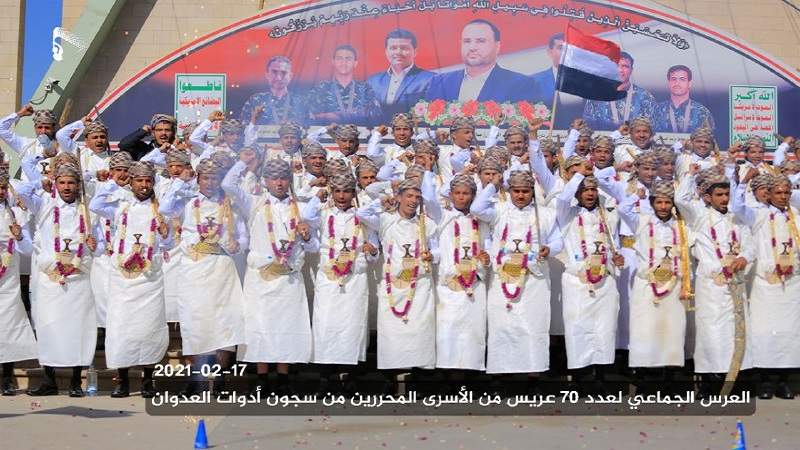 A Collective Wedding for 70 Bridegrooms of the Army

The Social Care Department of the Ministry of Defense, in cooperation with the Public Telecommunications Corporation, organized its first collective wedding for 70 bridegrooms from the liberated prisoners of the army and the people’s committees in the presence of Mohammed Ali Al-Houthi, a member of the Supreme Political Council.

At the wedding ceremony, Al-Houthi congratulated the grooms, noting that the homeland is in joy for the liberation of the prisoners and coming home safely.

He praised the steadfastness of the released prisoners and the exploits they made while defending the homeland on various fronts and being exposed to the worst torture techniques used against them in the enemy’s prisons.

The Houthi Supreme Political Member reiterated Yemen’s position welcoming the honorable peace based on practical steps and realistic decisions to stop the aggression and lift the siege on Yemen.

He ridiculed President Biden’s statements regarding his call to stop the war in Yemen and the media noise that accompanied it, considering that call as insincere and not real, but with the aim of portraying America as a “dove” of peace.

He stressed that the Yemenis have become more aware of America’s attempts, who are leading the Saudi-UAE on their aggression on Yemen and controlling their decisions, noting that the Saudi-UAE regime cannot implement anything without a green light from the US.

The wedding, which was attended by several political, social and cultural figures, included the operetta of the September 21st band.