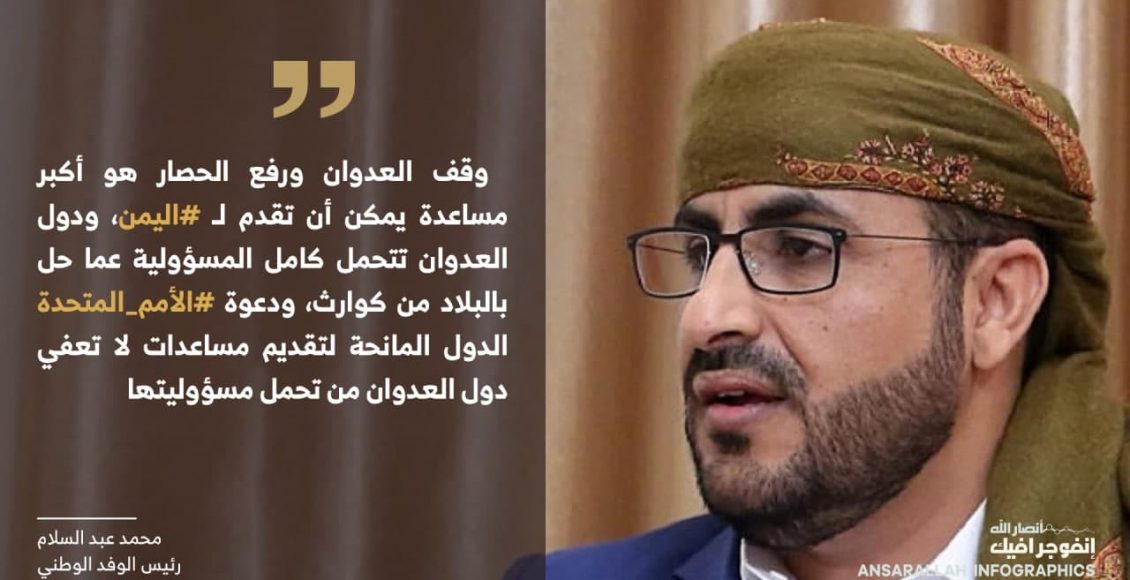 The Biggest Help Is by Stopping the Aggression and Lifting the Siege: Head of the National Delegation

The head of the national delegation, Mohammed Abdulsalam, emphasized, on Monday, that the greatest help that can be provided to Yemen is to stop the aggression and lift the siege.

“Stopping the aggression and lifting the siege is the greatest help that can be provided to Yemen, and the countries of aggression bear full responsibility for the disasters that befell the country,” Abdulsalam said on a Tweet.

Abdulsalam pointed out that the United Nations’ call on donors to provide aid does not exempt the Saudi-UAE aggressors from bearing their responsibility.

“The biggest aid provided by the aggressors to Yemen is the daily raids, the unjust blockade, the prevention of entring oil tankers, the closure of Sanaa International Airport, which resulted in several humanitarian disasters,” he added.

Mohammed Abdulsalam clarified that the UN conferences that plea for donations for the sake of Yemen, in light of the aggression and siege Yemen is facing, do not help Yemen as much as it helps the Saudi-UAE-led aggression by giving them an opportunity to start a new page.

He also stressed that the conferences help the countries of aggression to present themselves as donor countries, not aggressive countries that must stop their aggression and lift the siege imposed on Yemen.