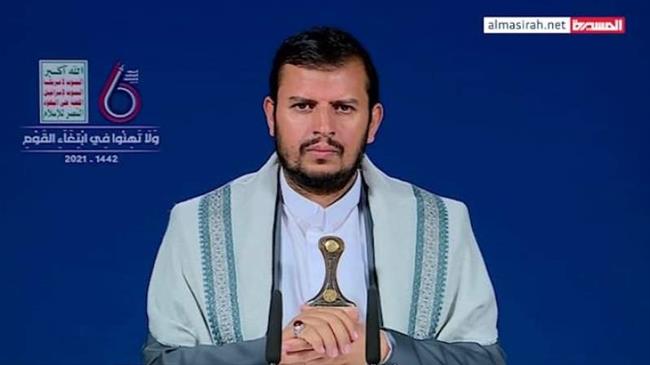 Houthi: War on Yemen is Directed by US and Israel, Implemented by Saudis

The leader of Yemen’s popular Ansarullah movement says Saudi Arabia and the UAE are advancing the agenda of the United States and the Israeli regime in the Middle East.

Speaking in a televised address in Sana’a on Thursday as the war in Yemen enters its seventh year, Abdul-Malik al-Houthi said Saudi Arabia and the UAE are simply executing their masters’ orders in the ongoing aggression against Yemen.

Saudi Arabia and its regional allies, he said, had no legal justification or excuse for launching the war on Yemen in March 2015.

“The fact that then-Saudi Ambassador to the United States, Adel al-Jubeir, declared the start of the Saudi-led aggression, determines the identity of the actual aggressor,” he said.

Israel, Houthi said, had been inciting a military action against Yemen months before the Saudi-led coalition decided to do so.

“War on Yemen was a joint plot constructed by the US and the Israeli regime. They assigned Saudi Arabia to the task, and the kingdom had to bear the costs and acknowledge full responsibility for its offensives against Yemen,” Houthi added.

The Ansarullah chief criticized Saudi Arabia and the UAE for capitulation to the US and Israel, stating that the two Arab regimes rely on inaccurate accounts given to them by their masters.

Riyadh and Abu Dhabi have miserably failed to realize the primary motive and agenda behind the devastating aggression on Yemen, he said.

The innocent Yemeni people are falling prey to the Saudi-led onslaught, al-Houthi said, emphasizing that the enemies have dishonestly branded the ongoing cruel military aggression as civil war.

“The Yemeni nation is enduring a dire situation in light of the aggression and tight blockade,” the Ansarullah leader said, referring to a crippling siege of the country by Saudi Arabia.

He also dismissed Saudi Arabia’s so-called peace initiative, saying, “How come those who have launched a war on Yemen are now claiming to be eager to mediate peace in our country?”

Houthi said those Yemenis who collaborate with the Saudi-led coalition are traitors to the nation, and accomplices in war crimes.

“Saudi-led forces have killed thousands of Yemenis by targeting mosques, educational facilities and other places of congregation. Many doctors and medical staffers have died as a result of their attacks on medical centers.

Houthi said the enemies are increasing the suffering of the Yemeni people in the futile hope that they would eventually give in.

Houthi predicted that Saudi Arabia and its allies will slip deeper into the Yemen quagmire in case the war persists.

The Ansarullah leader expressed gratitude to Iran and the Lebanese resistance movement Hezbollah for supporting the Yemeni people, and praised mediation efforts made by the Sultanate of Oman.

Saudi Arabia, backed by the US and its other regional allies, launched a devastating war on Yemen in March 2015, with the goal of bringing the government of Yemen’s former president Abd Rabbuh Mansur Hadi back to power and crushing Ansarullah.

Yemeni armed forces and allied Popular Committees have, however, gone from strength to strength against the Saudi-led invaders, and left Riyadh and its allies bogged down in the country.

The Saudi-led military aggression has left tens of thousands of Yemenis dead, and displaced millions of people. It has also destroyed Yemen’s infrastructure and spread famine and infectious diseases across the country.

An Interview of Mohammed Al-Houthi, part of the Supreme Political Party in Yemen

March 25: An Update of the Saudi Crimes, Violations in Yemen