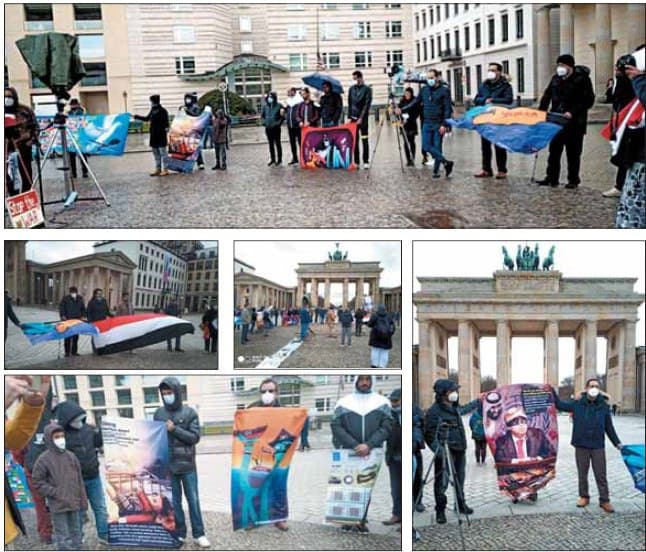 The Yemeni community in Germany has on Sunday held a vigil to denounce the Saudi-led coalition’s continuing aggression and blockade against Yemen.

At the vigil held in front of the Berlin Gate, near the US Embassy, several political and human rights activists of different nationalities participated, many speeches were delivered in English, German and Arabic.

They condemned the continuation of the aggression and blockade against Yemen for the sixth year in a row. Participants praised the steadfastness of the Yemeni people and the great victories achieved by the Yemeni army and Popular Committees on various fronts.

They confirmed that what is going on in Yemen is “a real disaster caused by the Saudi-led aggression, which began on March 26, 2015,” and denounced the fact that the invasion has caused the death and injury of thousands of innocent people as a result of airstrikes and mass destruction of infrastructure in Yemen.

They explained that the aggression, which started at midnight on 26 March 2015, was carried out with the direct and indirect support of the United States, Israel and Europe.
The participants condemned the continued sale of weapons to the coalition countries, describing this position, which shows a clear desire to continue shedding Yemeni blood and to exacerbate the suffering of innocent people in Yemen.

Two Bahraini and Saudi citizens participated in the vigil and sent a message of solidarity with Yemen, saying: “We send our love to our people in Yemen and we oppose the aggression against Yemen. We stand with the Yemeni people and what the Yemeni people are suffering is the same in Bahrain and residents of Qatif in Saudi Arabia, stressing that our cause is one.”

A statement, issued by the protesters, called for an end to the aggression against Yemen in all its forms and to preserve Yemen’s unity and territorial integrity. It also demanded an end to the sale of weapons to Saudi Arabia and the UAE and to lift the blockade imposed on the Yemeni people.

The statement also called on the international community to implement rapid emergency measures to save patients, such as the opening of Sana’a airport and bringing oil derivative shipments to the port of Hodeidah.

March 28: An Update of the Saudi Crimes, Violations in Yemen