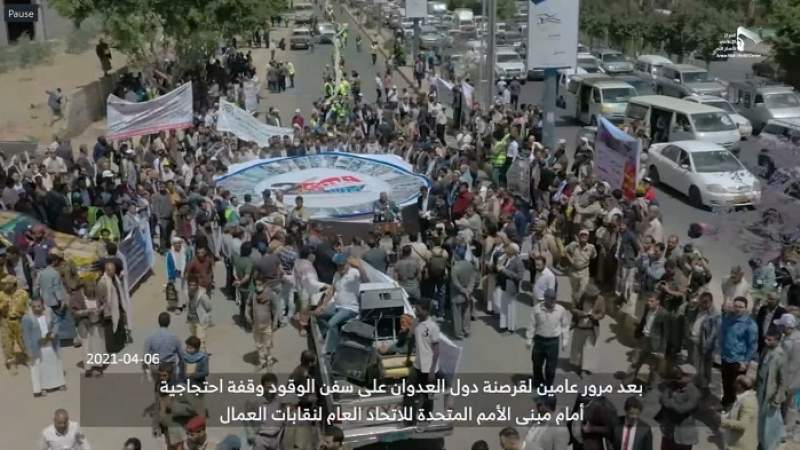 A massive rally by the Yemeni Petroleum Company (YPC) and its divisions protested in front of the United Nations headquarters in the capital, Sana’a, for today marks the passage of two years since the demands of ending the blockade and the entry of oil tankers.

The joint statement of the rally called for the entry of all fuel ships without delay in accordance with international agreements and United Nations laws, stressing not involving fuel in any conflicts and not to use this humanitarian aspect to achieve any political or military goals.

The statement blamed the US-supported Saudi Coalition and the United Nations for all the consequences of this unjust blockade on the Yemenis, especially the prevention of oil ships entry.

For his part, the director of the YPC, Ammar Al-Adrai, affirmed that the US is leading the blockade against Yemenis for more than two years.

He explained in a speech during the protest that the fines exceeded the $ 150 million, which the Yemeni people will incur as a result. He stressed that the brutal blockade on Yemen with a blatant cover by the United Nations is backed by the US to punish the Yemeni people.

The director of the Yemeni Oil Company held the forces of the aggressive coalition and the United Nations responsible for what the situation in Yemen will turn out as a result of the depletion in the country.