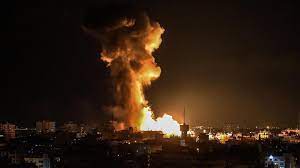 Israeli Prime Minister Benjamin Netanyahu on Thursday accepted a ceasefire, which will stop 11 days of aggression on the Gaza strip. This was reported by Quds News Network.

At least 232 Palestinians, including 65 children, have been killed in 11 days of Israeli airstrikes.

Houthi: If the Saudi Coalition Goes to Liberate Palestine, We’ll Support It

Dozens Of “Oil And Gas” Locomotives Burned In Marib