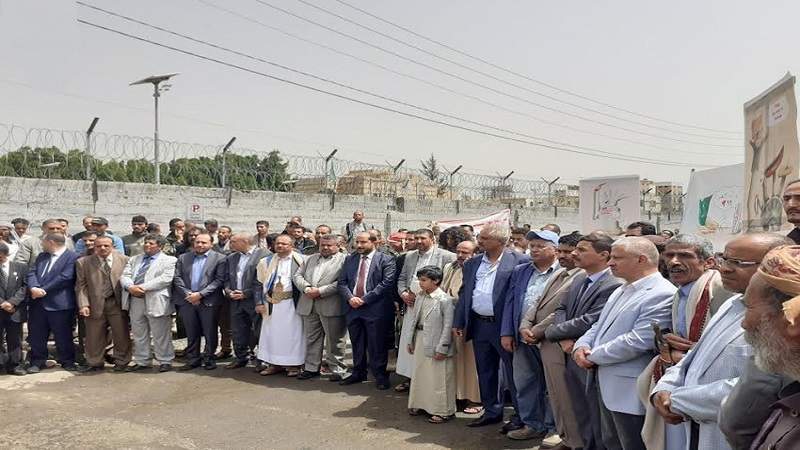 Service sectors have warned of catastrophic consequences on the environment, health, and the humanitarian situation in general, as a result of the US-led coalition’s continued detention of oil derivatives ships.

The hygiene and environment sectors, the local Water and Sanitation Corporation, the Works Office and its branches in the capital, and the employees of the Yemeni Petroleum Company, protested in front of the United Nations office in Sana’a, in the presence of the Executive Director of the Oil Company, Engineer Ammar Al-Adrai.

Protestors condemned the arbitrary practices by the Saudi aggressive coalition and its maritime piracy on oil derivatives ships and prevented their entry to the port Hodeidah.

It was pointed out during the protest that the detention of fuel ships will lead to the cessation of sewage treatment plants and cause a disaster for the residents of the Yemeni capital, in addition to stopping the pumping of approximately one million and 10 thousand cubic meters of water and depriving nearly five million people of drinking water.

Those authorities called on the United Nations to intervene immediately to put pressure on the US-backed Saudi aggressive coalition to allow the entry of oil derivatives ships in order to avoid an environmental and health disaster.

The participants in the demonstration called on all the people of the world to deliver messages to the international community to stop sea piracy on fuel ships.

The spokesman stressed that the situation in Yemen has become catastrophic as a result of the continued detention of oil ships, as the total fines for the seized ships amounted to ten million dollars, equivalent to more than six billion riyals.

The company’s official spokesman held the forces of the coalition of aggression and the United Nations fully responsible for the continued detention of ships and the prevention of their entry to the port of Hodeidah.

August 2: An Update of the Saudi Crimes, Violations in Yemen