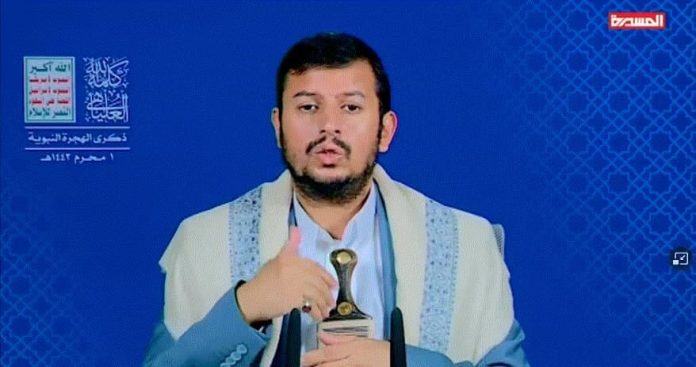 Leader of the Revolution: No peace as airstrikes, attacks and suffocating siege continue

The Leader of the Revolution Sayyed Abdul-Malik Al-Houthi stressed that the concept of peace cannot be accepted as the Saudi-led aggression coalition airstrikes, attacks, abuses and the suffocating siege on the Yemeni people continue.

In his speech this afternoon, on the occasion of the anniversary of the Prophet’s migration and about the latest developments in the region, Sayyed Abdul-Malik said that those who advocate peace while sponsoring the continuation of the aggression offer peace in the Israeli way.

They should stop the aggression and siege and treat the war files as a prisoner file, compensate the damages and stop interfering in Yemen’s affairs, he added.

He reiterated the readiness for real peace, with several initiatives, one of which was presented when the Omani delegation came to Sana’a and were important initiatives. “If the Saudi announces an end to the aggression and the blockade, we will welcome that,” he said.

Sayyed Abdul-Malik explained that the overall targeting reveals the real intentions of the Americans and that their war is a war on all the Yemeni people.

He stressed that the Problem of the American is not with a single component, the measures of the embargo do not exclude anyone.

Sayyed Abdul-Malik said that raising the customs tariff in Aden port with their great efforts to control the commercial movement is a step towards targeting comprehensively the Yemeni people.

He indicated that the first step to target the local currency has been made by Americans through transferring the Central bank and printing new banknotes, in addition to other policies damaging the purchasing power of the people.

Sayyed Abdul-Malik affirmed that the comprehensive targeting has revealed the true intentions of the Americans and their war against all the Yemeni people.

Al-Houthi went on to say that the measures taken by the corrupt government of Hadi are a scandal for traitors and for the Saudi, Emirati, American and British.

He explained that the economic war against our country included many aspects, the looting of oil and gas wealth.

Sayyed Abdul-Malik stressed that the Saudi-led aggression countries’ insistence that they continue their aggression, siege and prevarication without taking practical steps even on the humanitarian issue, which is a problem.

The leader of the revolution called on the Yemeni people to be aware of what the enemies are doing, so our suffering continues, and the international community can only hear it if there are victories made by the Yemeni army and popular committees.

He further He also called for intensifying the awareness efforts in confronting the entire enemy’s misleading endeavors and its soft warfare.

Civil Aviation Authority: More than 30 patients die daily due to the closure of Sana’a Airport