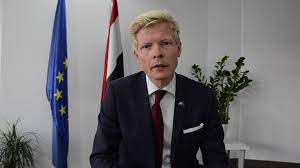 UN special envoy for Yemen, Hans Grundberg, on Friday stressed the need to open Sanaa International Airport and resume work in the port of Hodeida.

In his first briefing to the UN Security Council, he said that the fighting in Yemen must stop, and that external actors must work to promote the de-escalation process.

Grundberg stated that their participation should be based on supporting a political settlement led by Yemenis, pointing out that a peaceful and stable Yemen has become a basic necessity for the stability of the entire region.

He stressed that the economic war is devastating for Yemen and its people, demanding the immediate lifting of the siege, the opening of Sanaa airport to commercial traffic, and the resumption of the work in the port of Hodeida as it was in the past.

The peace process in Yemen has been stalled for a long time, Grundberg added, noting that it is imperative for the parties to the conflict to engage in an UN-facilitated peaceful dialogue with each other based on the terms of a comprehensive settlement, with good faith and without preconditions.

The liberation of two districts in Marib province: spokesman