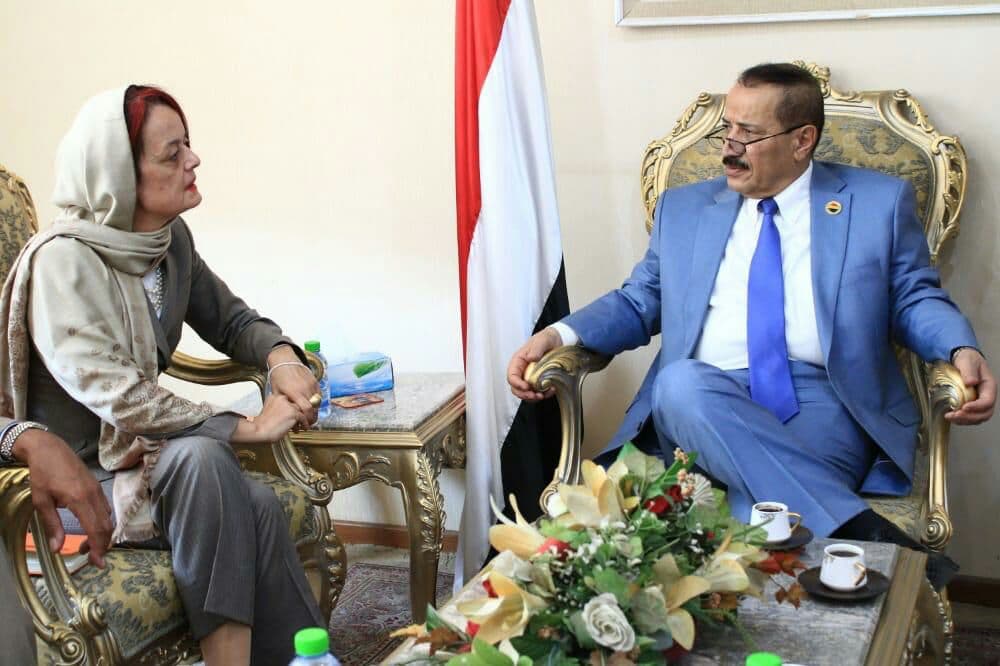 The Minister of Foreign Affairs Hisham Sharaf met on Sunday with the Resident Representative of the International Organization for Migration (IOM) Dina Barmer.

At the meeting, which was attended by the director of the United Nations Security and Safety Office in Sana’a, Sharaf and Barmer reviewed the activities of the IOM in Yemen and the progress of its programs.

Minister Sharaf stressed the importance of giving the humanitarian and relief projects the top priority in the organization’s activities during this critical stage that Yemen is going through due to the aggression and siege.

He pointed out the need to pay attention to the displaced needs, pointing to the world’s neglect of the issue of more than 3.5 million displaced people who were forced by the aggression, aerial bombardment and the operations of the pro-aggression armed militias to leave their homes and seek refuge in safer areas, waiting the end of the aggression and mass siege.

The minister pointed to the importance of the joint coordination among the IOM, international organizations, and concerned government agencies in providing services and assistance to the displaced, whose suffering began to be forgotten a long time ago by the international community.

Minister Sharaf stressed that the government has provided and will continue to provide all facilitations required for the work of the IOM in accordance with recognized diplomatic norms.

In return, director of the UN security and safety office stressed that the organization is committed to giving priority in its activities to the humanitarian and relief aspects of the displaced and asylum seekers, as well as continuous coordination with the relevant local authorities.

UN: at least 18,000 Yemeni casualties by Saudi airstrikes in the six-year old war