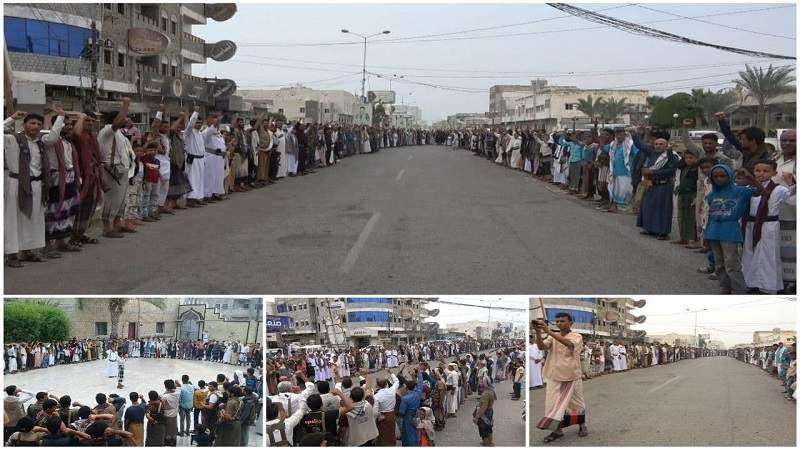 Several rallies to denounce the Saudi aggression and siege

The participants in the rallies denounced the practices made by the aggression and their mercenaries against the Yemeni people, including crimes, siege, the bombing of civilians, targeting service facilities and infrastructure.

They stressed that the continuation of the US-backed aggression and siege will not discourage the people of Yemen in continuing the battle of national liberation, defeating the occupiers, and liberating every part of the country.

Statements issued by the rallies condemned the violations of the aggression and its mercenaries, which confirm the extent of their failure and loss on the battlefield.

The civilians at the rallies confirmed that will continue their, steadfastness against this brutal aggression.

The statements denounced the insistence of the aggression countries on the blockade of the ports of Hodeidah and the detention of oil derivatives ships in the sight and hearing of the United Nations, despite taking arbitrary measures in inspections, holding the United Nations and its mission to support the Hodeidah Agreement fully responsible for the violations and crimes carried out by the aggression.

Moreover, the statements called for participation in the commemoration of the birth of Prophet Mohammed, and to support the convoy that will launch to remark the prophet’s birth date.

Geneva: An exhibition to show violations committed by the Saudi-led aggression against Yemenis