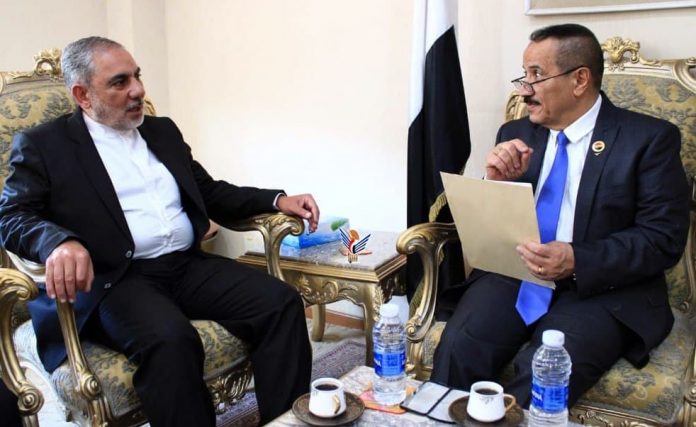 Minister of Foreign Affairs Hisham Sharaf on Wednesday discussed with Iranian Ambassador in Sana’a Hassan Irlou the areas of existing cooperation between the two countries and ways to enhance them.

They touched on the latest developments in the national arena, the Arabian Peninsula and the Gulf, the Iranian-Saudi dialogue, and the visit of UN envoy for Yemen Hans Grunberg to Tehran.

The Foreign Minister stressed that dialogue is the best way to resolve differences between countries.

Sharaf reiterated Sana’a’s clear and firm position and its readiness to achieve a just and honorable peace, while exercising the right of self-defense against all hostile acts of the Saudi-led aggression coalition.

For his part, Irlou reiterated Tehran’s support for efforts that would contribute to alleviating the suffering of the Yemeni people and to continue its efforts to achieve peace in Yemen.