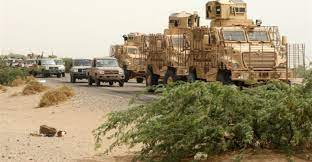 It seems that the field map is becoming clear in the governorates of northern Yemen. With the approaching fall of the strategic city of Marib in the hands of the Yemeni army and the popular committees, the other fronts in Hudaydah and Mokha began to fall apart, as if the Marib front has shaken the other fronts and decided the whole battle.

In a sudden turn in the course of the field, the Emirati-backed forces withdrew from the southern areas of Hudaydah that is led unilaterally by Haitham Taher in an unreasonable way with respect to the forces in Mokha city led by Tarek Saleh and backed by the United Arab Emirates [UAE] as well, which left the latter shocked, confused, and doubtful about the existence of an agreement and a prior coordination between Taher and close confidents of the fugitive president Abed Rabbu Mansour Hadi who is supported by Saudi Arabia.

Sources reported unannounced heated disagreements among the factions of the UAE-backed forces in the western coast of Yemen, in the aftermath of the sudden and wide withdrawals in Hudaydah areas, which represented a stab in the back of Saleh’s forces, leaving the armed factions affiliated with the southern transitional council shocked and confused. The sources added that the so-called “legitimacy of Hadi” is coming to an end.

The withdrawing forces, however, claimed that they have evacuated the fighting areas in Hudaydah in accordance with the Stockholm Agreement reached late 2018, which is supposed to take place in coordination and understanding with the United Nations mission; but it was not kept informed with the updates.

But other sources asserted that the Emirati forces had previously started a large-scale evacuation of its forces after receiving a series of military strikes from the Yemeni Ansarullah movement. Such strikes were based on accurate intelligence by the movement.

In addition, the Yemeni army and popular committees rushed to take control over these areas, and opened the main road that connects them with the capital Sanaa. Among these areas are the eastern and northeastern coastal city of Hudaydah, and areas to the south of the city on the outskirts of the Hudaydah International Airport, in addition to the Ad Durayhimi District, the coastal line of the “Beit Al-Fakih” District, At Tuhayta District, Al-Haima port to the south of Al-Khawkha District, areas in the Hays District and areas to the south of these two directorates of the Taizz Governorate.

On the other hand, Saudi Arabia evacuated most of its compounds in the last few weeks, especially in Al-Mahrah governorate, but a number of its troops is still at its center in Al-Ghaydah, along with a group of officers who still roam about 27 compounds where mercenaries forces of the southern separatists are present, and it has become rare to find any Emirati forces in many southern areas.

Regarding the Marib front, the Yemeni army and the popular committees have eased their attack on the city and headed to the south, achieving a progress that surpassed what it was like before, and succeeded, for the first time since years, to return to southern areas, even though a settlement with the local tribes there. But this operation allowed them to lay siege to all the southern and eastern crossings- the southern crossings that lead to Marib, and that made the Saudis and all the southern mercenaries in need for a long trip that takes them from Hadramout to the sieged city.

Accordingly, there is only one passage left, and if the Yemeni army and popular committees decide to go for an all-out confrontation to capture the city, this passage will be closed. The problem of Saudi Arabia here is that the support it received from the US did not help. Therefore, Marib has fallen and the greater is yet to come. Was the UAE Minister of State for Foreign Affairs Anwar Gargash right when he said that “the liberation of Hudaydah is the beginning of the end of the war”?

Yemeni journalist Ali al-Darwani confirmed to Al-Ahed News that nothing is being done confidentially regarding the Emirati withdrawal from the western coast that is at least more than 50 km long, but rather a relocation in case Marib fell, which will impose new fields on Ansarullah, first of which will be this coast where Taher’s forces consider themselves to be trapped between the jaws of the pincers, for this coast’s width reaches 5 km in some areas. He added that these forces opted to withdraw to the southern areas to strengthen their influence in order to defend Bab al-Mandeb strait which is a US-“Israeli” quest, fearing its fall in the special committees hands and thus taking control over the maritime navigation.

Al-Darwani also said that in case Marib fell, 50,000 to 100,000 fighters of the Islah party backed by the UAE and its allies like al-Qaeda and Salafists will flee to the southern regions, where they have authority. This large number will enhance their resilience in defending Bab al-Mandeb which might be a priority for the Yemeni army and the committees, and even for the Saudi-backed forces in Aden and the south, which fought the Islah Party in many areas.

The Yemeni journalist concluded that the Emirati withdrawal is a purely tactic withdrawal so that Abu Dhabi maintains its interests in the south, fearing Ansarullah first, and Saudi Arabia second.

PM: We are subjected to brutal aggression and siege, which has mostly affected children