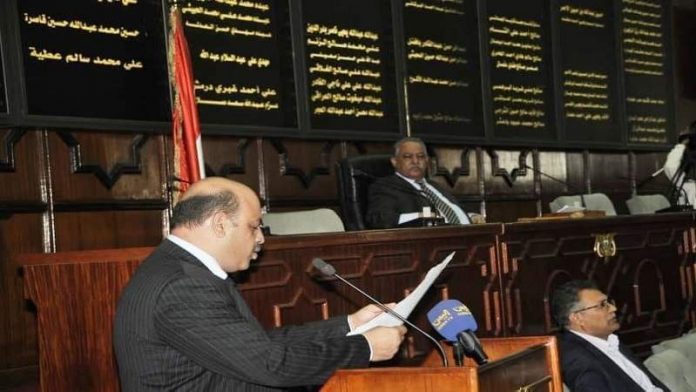 The Parliament, headed by Speaker Yahya Al-Ra’i, stood in front of the escalation of the US-Saudi-Emirati aggression, and its intensification of raids on Yemeni cities and villages, condemning at the same time the inclusion of Hamas in the list of terrorism.

The Parliament considered the continuation of the raids and targeting of civilian objects in Sana’a, and a number of the republic’s governorates, as a filthy aggression targeting children, women and the elderly. They affirmed that the continuation of US-Saudi aggression in destroying infrastructure and killing children and women in full view of the international community are war crimes that are added to a long and documented list of crimes and massacres.

The Parliament held the countries of the coalition of aggression, and those behind them, fully responsible for these massacres, nearly seven years ago, against the Yemeni people. It deplored the negligent stances of the United Nations and the UN Security Council, and their turning a blind eye to war crimes against humanity in Yemen, which contravene all humanitarian norms and charters and international law.

The Parliament affirmed their condemnation and rejection of the conspiratorial steps taken by Britain targeting the resistance in Palestine, including the Islamic Resistance Movement Hamas, by including it in the so-called terrorism list, considering this a service to the usurping Zionist entity.

The Parliament reiterated Yemen’s firm position with the Palestinian people, and all movements that stand in the trench of the Arab and Islamic resistance to defend Al-Aqsa and Al-Quds Al-Sharif, pointing out that the Palestinian cause was and will remain the first Arab and Muslim cause.