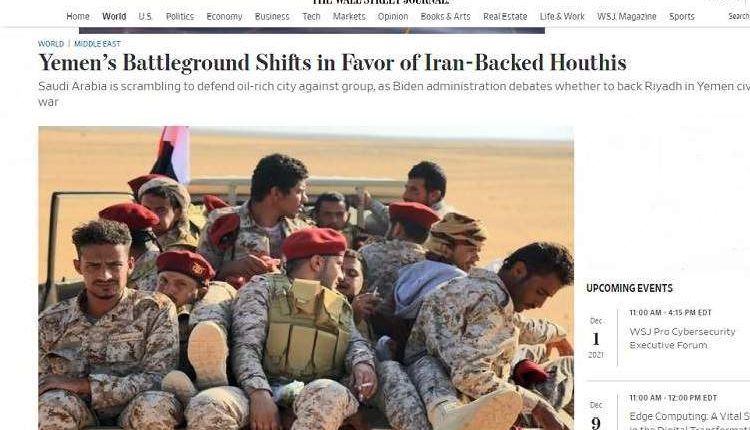 An American newspaper confirmed Biden administration’s tendency towards escalation in Yemen; To help the Saudi regime, which is suffering continuous losses, and which the newspaper confirmed is demanding the US administration to provide more support, while the US envoy to Yemen continued to incite and justify the continuation of the aggression and siege.
The Wall Street Journal said that Saudi officials called on the Biden administration to provide more intelligence and military support to confront the Yemeni missile and air strikes against Saudi Arabia. It explained that “there are indications that Biden is ready to change course to help the kingdom carry out the attacks on Yemen,” confirming the US administration’s tendency toward escalation, which is also clarified by the course of reality.

The newspaper said that there are officials in Biden’s administration who are pushing for the intensification of US military support for the Saudi regime, and are urging Biden to abandon the “restrictions” he had announced. In this context, the newspaper indicated that the Biden’s administration had already approved deals worth more than one billion dollars for military sales to the Saudi regime, including “offensive” support, which once again reveals the falsehood of Biden’s announcement of “stopping offensive support” to Saudi Arabia.

In parallel, the US envoy to Yemen, Tim Lenderking, continued to affirm the United States’ adherence to escalation option. In a new interview with The National, Lenderking repeated his accusations to Sana’a of obstructing peace, a claim that the United States uses as a justification for the continued aggression and blockade.

The US envoy renewed the threat of “international consensus” and “sanctions” to blackmail Yemen’s Salvation government; In order to push it towards surrender, and to stop military operations in Marib and missile air strikes on the Saudi depth.

Linderking’s statements, and what was published by the “Wall Street Journal”, confirm the American tendency towards escalation militarily and politically, and the falsity of all “peace” propaganda and allegations.