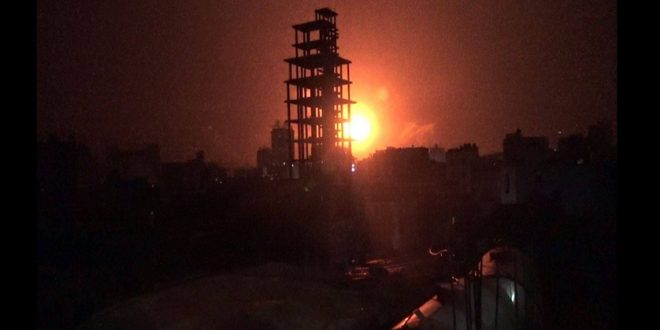 On Monday night, the US-Saudi warplanes lauched a series of aerial raids on the capital, Sana’a.

The brutal air raids targeted a car maintenance workshop belonging to the citizen Youssef Al-Sami’i in Al-Khair neighborhood, next to the Saudi German Hospital on the North of 60th Street, which led to the damage of the homes and cars of citizens and caused a state of panic among civilians, a security source stated.

The source added that the Saudi fighter jets launched two raids near the Yemen Satellite TV Channel building in the Al-Thawra district, and two raids on Jarban area in Sanhan district.

The source condemned the continuation of the criminal Saudi aggression in targeting populated areas in light of the shameful silence and international complicity.

Child, woman injured after the blast of a mine from the leftovers of the aggression eastern Sana’a