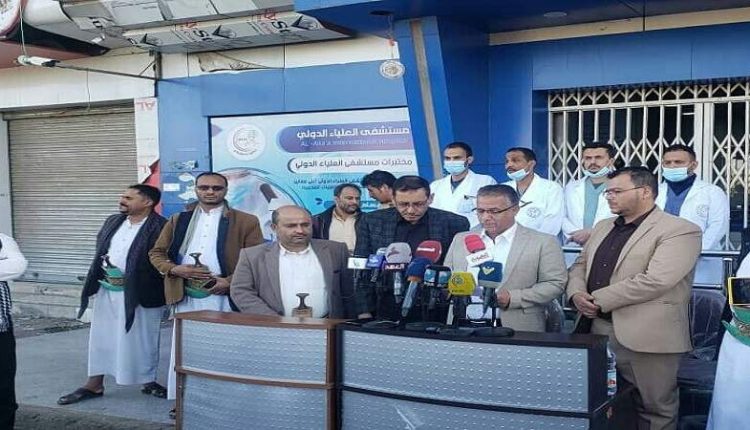 The Health Office in Sana’a, held a press conference, Friday, on Al-Zubayri Street, which was targeted by the Coalition’s raids, to inform the media about the damage caused to hospitals and medical centers.
The Director of the Health Office in Sana’a, Mutahar Al-Marouni, confirmed that the raids of the Coalition launched yesterday evening targeted a medical area in the center of the capital, which includes three government and private hospitals and dozens of private diagnostic and treatment centers.

Al-Marouni explained that 20 injured were received and patients were evacuated from the affected hospitals to other hospitals, explaining that the Coalition deliberately targeted neighborhoods in which there are hospitals to put more pressure on the health sector, which is already suffering as a result of the Coalition and the siege.

The directors of Al-Alia and Magrabi Hospital confirmed that the damage to the hospitals was great, and that they had to evacuate patients.

The director of the New Scan Medical Center also confirmed that the Coalition’s raids led to the disruption of the center’s diagnostic services, and thousands of patients from the capital and governorates will be affected as a result.

A medical source told Al-Masirah that the raids near Al-Alia Hospital in Sana’a caused a state of panic and panic among patients and medical staff.

The source added that severe damage led the hospital to be out of service as a result of the raids of the Coalition.

Claiming it only hits “legitimate” military targets, Riyadh has been targeting the city’s infrastructure, including bridges and a prison.