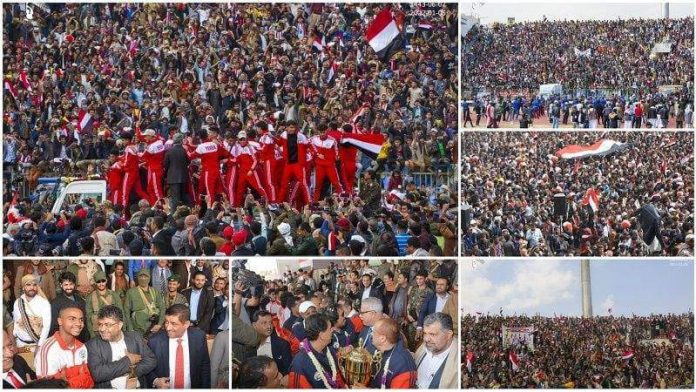 At the massive crowd event, which was attended by Prime Minister Dr. Abdulaziz bin Habtoor, Presidential Office Director Ahmed Hamid, a number of ministers and the mayor of the capital. The members of the Supreme Political Council, Mohammed Al-Houthi, Jaber Al-Wahbani and Ahmed Al-Rahawi praised the historic achievement of the team, which made the Yemeni people happy.

They praised the role of the technical and administrative bodies in preparing the players and entering the tournament with the spirit of champions, despite the differences in capabilities compared to the competing teams.

They pointed out the need to preserve this team and harness abilities for the team to achieve more achievements in foreign sports forums, despite the systematic destruction of the infrastructure of the sports sector by the aggression.