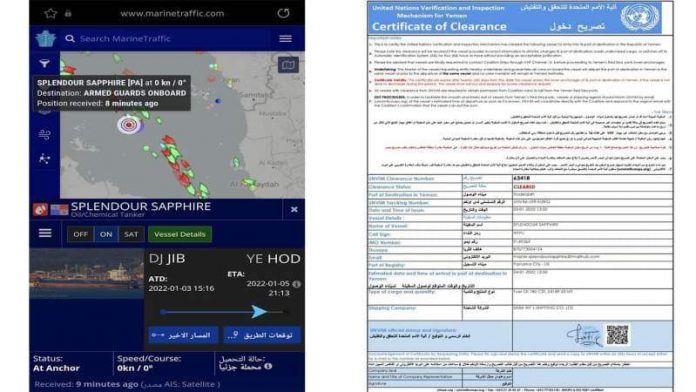 Saudi aggression detained another oil tanker carrying over 24 thousand tons of fuel, taking it by force to Najran.

Al-Mutwakil confirmed that the coalition forcibly took the ship to Jizan, despite passing inspection and obtaining UN permits, bringing the number of seized ships to 5 oil ships.

Saudi Arabia, backed by the US and its other regional allies, launched a devastating war on Yemen in March 2015. The seven years and half of war have killed hundreds of thousands of people and destroyed much of the country’s infrastructure. Yemeni people are facing malnutrition, hunger, and famine, which have increased risks of disease and starvation.

As part of its economic war, the US-Saudi aggression worked to drain about 97% of the Yemeni state’s resources, either by controlling them militarily such as oil and gas sources, freezing Yemeni foreign assets and transferring them to mercenaries and financing coalition operations, or imposing a siege on the vital port of Hodeidah and the most important port after Aden, which is still in the grip of Sana’a and out of control of the aggression.

The coalition of aggression continues to piracy, detaining fuel ships, and preventing them from entering the port of Hodeidah, despite obtaining permits from UN, which aggravates the humanitarian catastrophe due to the suspension of many vital service sectors, especially hospitals, electricity, water, cargo trucks, as well as waste trucks.