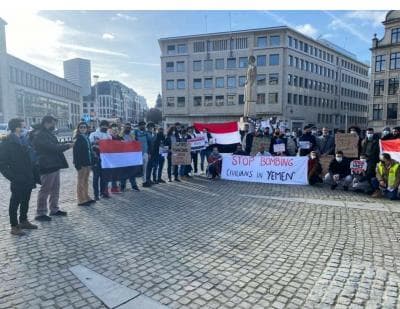 Rally in solidarity with Yemen held in Brussels

Several Yemenis in the Belgian capital, Brussels, have organized a protest rally calling for an end to the war waged by the Saudi-led coalition on Yemen.

In the rally, the participants raised banners calling for pressure on the coalition and their supporters to stop the war and return to the dialogue table to bring peace and restore security and stability in the country.

The protesters issued a statement condemning the continued bombing of civilians in Yemen, and listed a statistic of the number of deaths, destruction and humanitarian violations affecting the Yemeni people, its economic capabilities and vital facilities for the past nearly 7 years of the war.

The statement stressed the need for European Union countries to stop arms deals to the coalition countries, to fulfill their moral obligations and humanitarian laws and to stop contributing to the destruction of Yemen and the killing of Yemeni people.