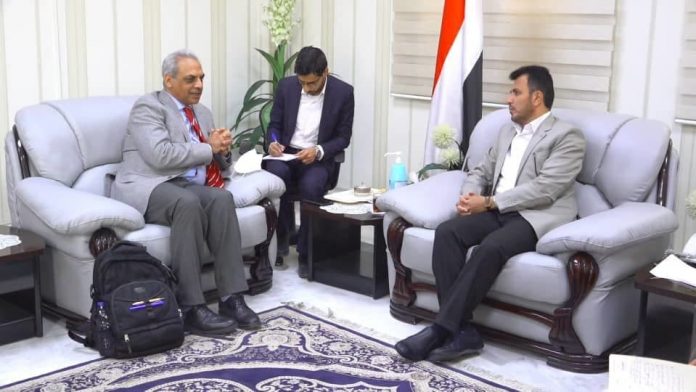 The Minister of Public Health and Population, Dr. Taha Al-Mutawakil, discussed  with the Director of the United Nations Office for Project Services (UNOPS), Fayyad Rasoul, the interventions of the office in the health sector during 2022.

In the meeting, the Health Minister affirmed keenness to enhance cooperation with UNEPS to contribute to the implementation of several health projects, especially the rehabilitation of hospitals in urban and rural areas.

Dr. Al-Mutawakil affirmed the need for the office’s support to complete the rest of the stages in Al-Kuwait Hospital’s building, rehabilitate the Republican Hospital in Saada, and support health facilities in the countryside to ensure the sustainability of providing services to citizens, especially in light of the continued aggression and siege.

For his part, the UN official praised the Health Ministry’s efforts to facilitate the implementation of UNOPS projects and interventions in the capital Sana’a and other provinces.

Rasoul reviewed the most important projects that the UNOPS would support during the coming period.