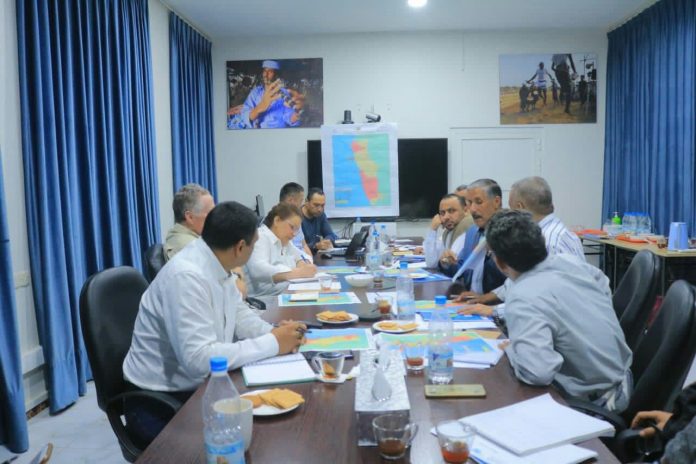 The head of the national team of the Redeployment Committee in Hodeida province met on Sunday with the head of the United Nations Mission to Support Hodeida Agreement (UNMHA).

In the meeting, Deputy Chief of the General Staff, head of the national team, Maj. Gen.  Ali al-Mawshaki discussed with UNMHA head Gen. Michael Perry a summary of the patrol plan presented by the UN mission in Hodeida.

The meeting touched on the security situation in Hodeida and the needs of the National Mine Action Center to clear and mark dangerous areas contaminated with mines and cluster bombs.

Al-Mawshaki strongly condemned the international silence towards the recent escalation of the US-Saudi-Emirati aggression.

He stressed that the Yemeni people have the legitimate right to defend themselves against the aggression.

The head of the national team stressed the need of the United Nations to play its role in the humanitarian aspects, including the opening of Sana’a International Airport and the port of Hodeida, distancing them from any conflict and neutralizing the national economy.

He called on the UN mission to oblige the other party to implement its obligations, reactivate the control points and work with the joint mechanisms of the Redeployment Coordination Committee, as previously agreed upon.

Al-Mawshaki also called on the United Nations to play its humanitarian and moral role to take a firm decision to prevent maritime piracy and prevent the detention of oil and food ships, given that the Stockholm Agreement is humanitarian in the first place.

For his part, Perry expressed his appreciation for the cooperation of the national team and its commitment to the concluded understandings.

He expressed his concern that the port of Hodeida would be dragged into the war, pointing out that the port provides humanitarian services.

Perry referred to the mission’s endeavor to mobilize the international community and the member states of the Security Council when presenting its briefing to the Security Council next Tuesday to take a binding decision to prevent the detention of ships of fuel and foodstuffs as an urgent priority.

He pointed out the mission’s keenness to implement the agreement with the United Nations Development Program to rehabilitate the ports of Hodeida and to secure and provide the necessary support to the National Mine Action Center.