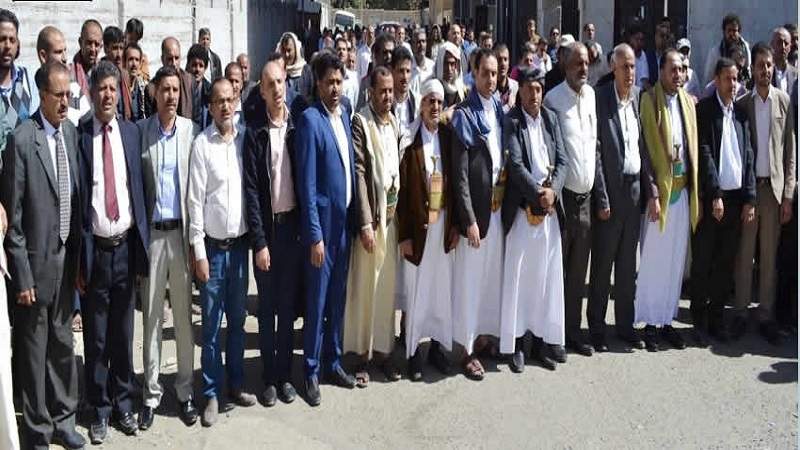 The service sectors in the capital, Sanaa, and the employees of the Yemeni Petroleum Company organized on Sunday a protest in front of the United Nations office, to denounce the US-Saudi-Emirati continued detention of oil ships.

In the protest, various service sectors, renewed the warning of an imminent humanitarian disaster, as a result of the continued detention of oil tankers by the US-Saudi-Emirati coalition of aggression.

Statements issued by the service sectors in the capital Sanaa demanded an urgent intervention to release oil tankers and allow them to enter the port of Hodeidah.

Moreover, the statements denounced the shameful international silence and the complicity of the international community and international organizations towards the arbitrary practices of the aggressive countries, which doubled the human suffering of the Yemeni people, who are being subjected to aggression and siege for seven years.

The statements also pointed out the catastrophic consequences for the environment and health sectors in the Yemeni capital, as a result of the continued detention of fuel ships due to the siege on oil from entering the country. It added that the consequences will include the suspension of the health sector and hospitals, the disruption of the hygiene sector and the accumulation of waste in the streets.

Participants at the protest called on the international community and humanitarian organizations to play the humanitarian role to prevent an imminent humanitarian catastrophe affecting all sectors, holding the United Nations and the Security Council fully responsible for the repercussions of the continued detention of fuel ships.

Moreover, the protesters called upon the free people of the world to intervene urgently and put pressure on the countries of aggression, led by the US, to stop piracy on oil ships and allow their entry to the port of Hodeidah, and ensure that the service sectors are provided with the necessary fuel, and to ensure that they continue to provide their services to citizens.

Woman killed, 10 wounded, after targeting their house with a US-Saudi airstrike in Hajjah