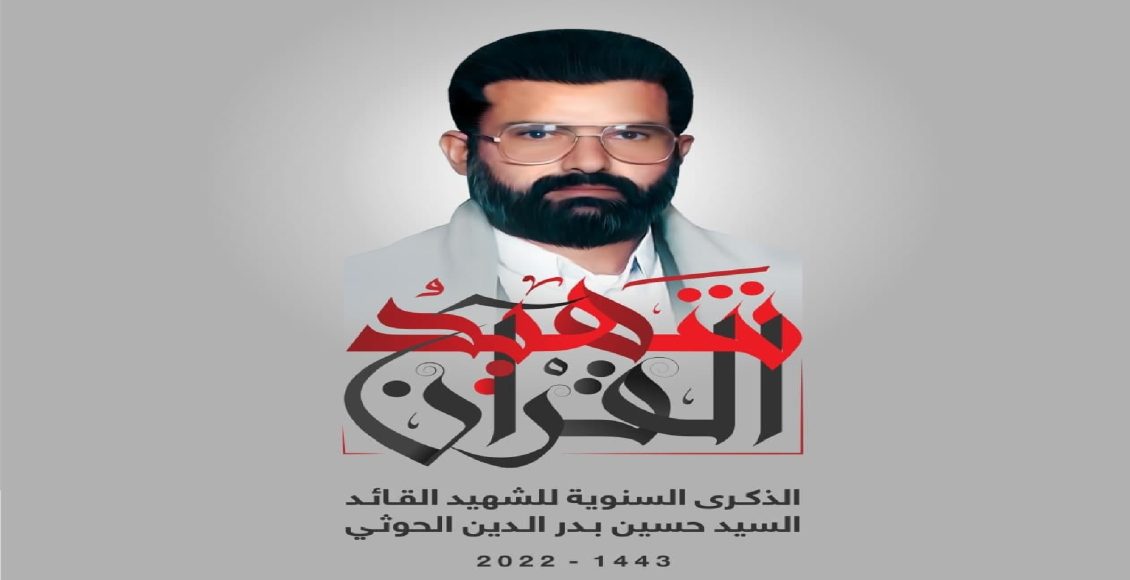 In commemoration of anniversary of Martyr Sayyed Hussein al-Houthi

Sayyed Hussein Badr al-Deen al Houthi was a religious scholar who served in parliament from 1993 to 1997 in the (Alhq) Islamic Party.

After his term in parliament, he dedicated his time to leading the “Believing Youth,” which means now Ansar Allah a group he helped establish in the mid-1990s affiliated with the al Huqq Party; the Ansar Allah aimed to revive Zaydi activism through proselytizing and education.

He repeatedly pledged loyalty to the state and denied that he was leading a rebellion.

The Ex-government of Saleh accused him of establishing unlicensed religious centers, arming the Ansar Allah, staging violent anti-American protests, and accused attempting to reestablish an imamate.

The  Ex-government of Saleh also accused Sayyed Hussein and Ansar Allah of receiving support from Iran and modeling itself after Hezbollah.

On June 18, 2004, the Ex-government of Saleh arrested 640 followers of Sayyed Hussein who were demonstrating in front of Sana’a Grand Mosque, and two days later launched an operation to arrest al-Sayyed Hussein in the mountains of Sa’ada.

In July 2004, the Ex-government offered a $75,000 reward for the capture of Sayyed Hussein, His death ignited an uprising by his followers, who became known as the al Houthis.

From the early 1990s until Yemen’s 2011 revolution, they gained physical ground, ideological influence, and political sway. Beginning as a religious revival group, the tribesmen and Sayyed descendants looked to their leader and namesake, Hussein al Houthi, to lead them out of forgotten corners of Yemen back onto the political scene. In 2004, as a reaction to the US invasion of Iraq and Afghanistan.

As a response, former President Saleh waged a guerrilla mountain war against Houthi and his followers from 2004 to 2009, led by former Ali Mohsen al Ahmar, completely destroying the northern province of Sa’ada with the help of Saudi fighters and American missiles. Though Sayyed Hussein al Houthi was killed in the first war of 2004, his brother Sayyed Abdul Malik, who still leads the movement today, quickly took the reins.

In the Provinces of Yemen, the Tribes stressed that the slogan embodies an attitude of faith and humanity towards the enemies of God and Islam and it has proved its impact and created in the hearts of enemies horror and humiliation. This slogan was raised by the Martyr Commander before the occupation of Iraq. “Death to America, Death to Israel, Damn the Jews, Victory to Islam.

The Leader of Revolution Sayyed Abdulmalik Bin Badr al-Deen al-Houthi, said that the Commemoration of the Martyrdom of Leader Sayyed Hussein Badr al-Din al-Houthi is an important station, from which we derive the determination and strength, adding that commemoration inspires and enhance our awareness and insight in face the continued aggression.

The leader pointed out that the nation needs a real vision of events and reality, challenges and risks and a true awareness of the enemy and their machinations. He stressed that Sayyed Hussein acted on the basis of a legitimate project to work correctly to address the dangers and challenges and directions of enemies.

He pointed out that the Qur’anic project, adopted by Sayyed Hussein started from a conscious reading about the enemy and the events and areas in which they move.

President of the Supreme Political Council – Higher Commander of the Armed Forces – Field Marshal Mahdi al-Mashat praised the martyr’s commendable acts and his Quranic life march in defending the issues of the nation and confronting the global tyranny and arrogance forces.

President al-Mashat indicated that the martyr leader’s annual anniversary is a station to look attentively at his life path and to follow in his footsteps.

The President confirmed that the march and method of the martyred leader would remain present in the nation’s conscience to draw from it the meanings of pride and dignity.

16 killed and wounded in Taiz and Sa’ada