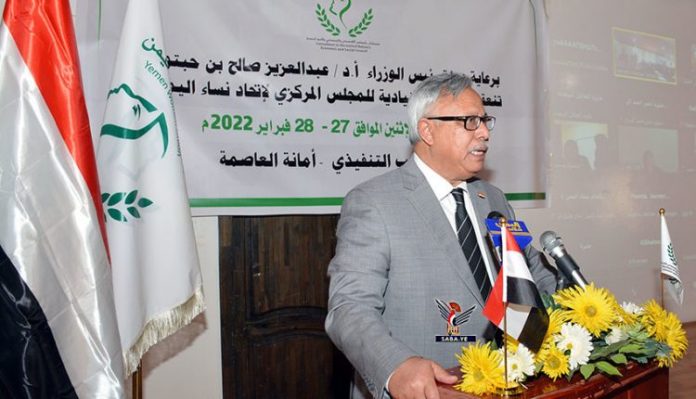 PM speaks about the important role of women in the nation

Prime Minister Dr. Abdulaziz bin Habtoor on Sunday affirmed that women are active partners in all areas of life, and are the most affected by wars and their direct and indirect consequences.

During his participation in the inauguration of the annual meeting of the Central Council of the Yemeni Women’s Union, Bin Habtoor referred to the role of the union, which is considered one of the oldest unions in the country, in empowering women economically, politically and socially.

He said that “no nation can rise without the participation of women, given that Yemeni women are present in all stages of human history in various areas of life.”

The Prime Minister pointed out that the government stands responsibly on the side of the union and contributes to preserving its gains for the benefit of women and their legally guaranteed rights.

During the meeting, Head of the executive office of the Yemeni Women’s Union Fathia Muhammad Abdullah explained that the meeting aims to evaluate the work, activities, and programs implemented by the union during the past year and exchange of experiences between branches to overcome difficulties.

She confirmed the union’s keenness to rehabilitate women healthily and psychologically, especially in light of the continuation of aggression, as well as paying attention to the wives of martyrs and vulnerable women.

Sayyid al-Houthi: the Quranic project is the right choice to be free with dignity (Report)