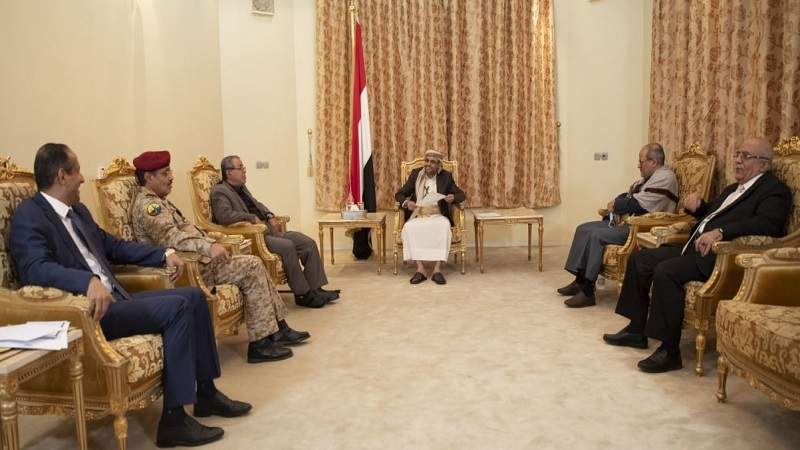 The Supreme Political Council affirmed in its meeting Sunday, headed by President Mahdi Al-Mashat, that the Republic of Yemen is with a real peace that guarantees the Yemeni people rights and the cessation of aggression and unjust siege.

The Council noted that Riyadh’s alleged calls for peace are not sincere, and they are, as usual, a prelude to a broad military escalation that is being prepared in the field as part of malicious plans to destroy Yemen.

The Supreme Political Council made it clear that when there is a sincere tendency to establish peace, the Republic of Yemen will be to take the initiative to make the peace process a success, stressing that the entrance to all of this is the humanitarian side.

On the meetings that the Special Envoy of the United Nations Secretary-General for Yemen, Hans Grundberg, is doing under the name of the Yemeni-Yemeni consultations, the Supreme Political Council affirmed that these meetings are not consultations in the true sense to chart a path towards a political settlement to bring peace, but rather cover the failure of the UN envoy to implement what he presented to the Security Council regarding the consultations.

The UN envoy should have taken the right paths that lead towards a serious political settlement of peace and an end to aggression, the Council explained, noting that the Yemeni people, who are paying a heavy price as a result of this aggression and siege, will not be deceived by the false and misleading calls.

The Council directed the government, agencies, and institutions to widely commemorate “the National Day of Steadfastness”, March 26, to emphasize that Yemen in the eighth year will be stronger than before.

In its meeting, the Council praised the army, the people’s committees, the missile and drones forces’ operations, especially the first and second operations of breaking the siege and what will follow.

The meeting reviewed a report on the oil derivatives crisis, stressing that this comes within the framework of the systematic economic war imposed on the Yemeni people led by the US-Saudi-Emirati aggression coalition.

The Council also hailed the security services’ announced achievements in arresting the cell that was preparing to detonate car bombs in the free areas.