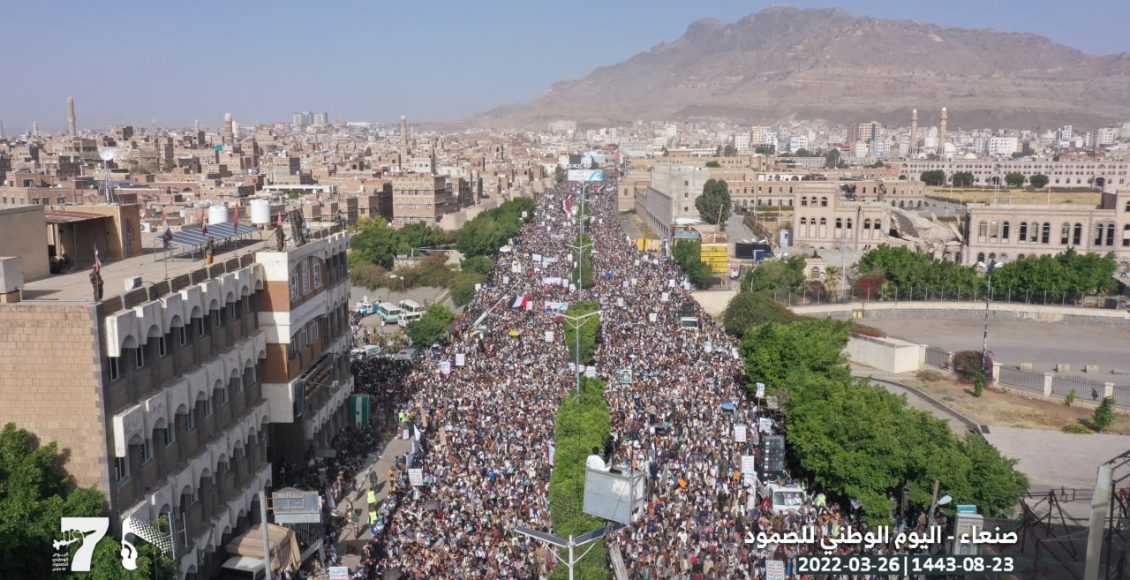 The capital, Sanaa, witnessed this afternoon, Saturday, one of the biggest rallies in “Bab Al-Yaman” square, in commemoration of the National Day of steadfastness in confronting the aggressive Saudi-led coalition and to mark the beginning of the eighth year of the Saudi brutal war.

The masses raised slogans expressing the steadfastness of the Yemeni people and their awareness, which foiled the aggressors’ plans and thwarted their conspiracies and schemes, which all aim at targeting Yemen’s land, people and capabilities.

The assembled crowd chanted slogans, stressing the continuation of steadfastness, moving forward in the battle against the US-Saudi-Emirati aggressors, and confronting them with greater awareness, cohesion and national alignment until victory is achieved.

The people at the rally stressed that after seven years of the aggression and its crimes, Yemenis have become more steadfast, aware, lined up behind their wise leadership, in the face of the conspiracies of the forces of aggression, and are responding to their escalation, crimes and siege.

The participants in the rally expressed pride in the achievements and qualitative operations of the armed, missile and drone forces to deter the countries of aggression, noting the victories that the army and popular committees accomplished in various frontlines.

They renewed their support for military industrialization and missile power, calling for more operations that will force them into breaking the siege.

They also called on using strategic options to target the depth of the countries of aggression, until their aggression is stopped and their siege is lifted from the Yemeni people.