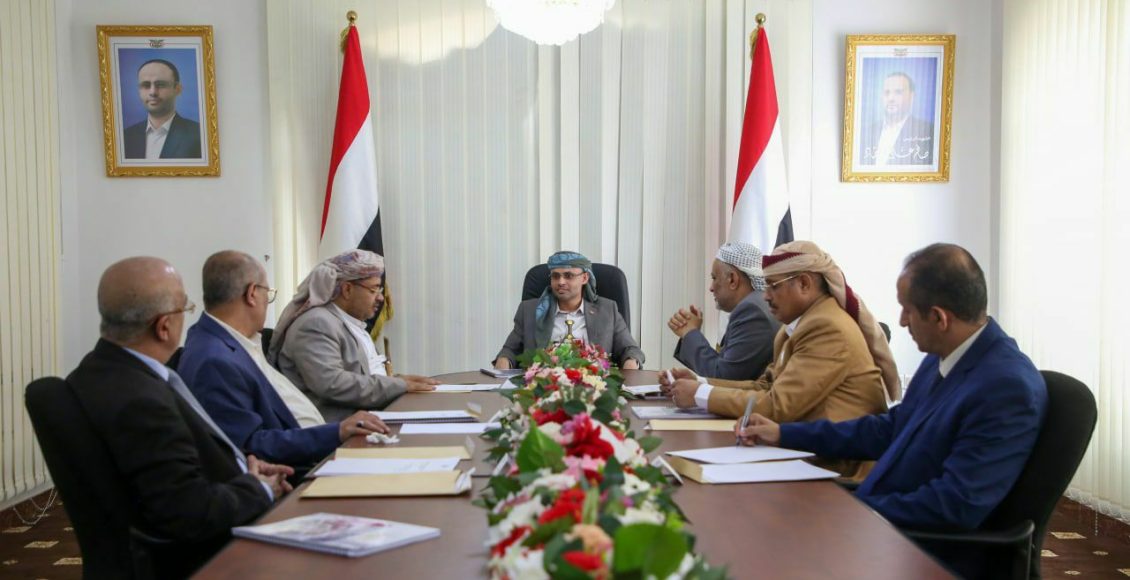 The Supreme Political council: The humanitarian file is the real indicator of this UN-armistice (Report)

The meeting stressed the necessity of Saudi Arabia’s commitment to lifting the blockade, removing all obstacles that are subjected to ships’ arrival at the Yemeni port of Hodeidah and the opening of Sana’a International Airport, considering that if the aforementioned was granted, it will able the warring parties to solve the rest of the issues, warning of any procrastination that will negatively impact the trust built towards this current truce.

The meeting dealt with the actions taken by the coalition of aggression recently in Riyadh under the so-called consultations and the accompanying launch of the so-called Presidential Council as an alternative to the fugitives former president Abd Rabbo Mansour Hadi and Ali Mohsen al-Ahmar, noting that this confirms the falsehood of the alleged legitimacy that has now been overthrown by the aggressive coalition itself, which back then took this excuse to destroy Yemen, kill Yemenis and besiege them for more than seven years, with the complicity of the international community.

The meeting affirmed that the Yemeni people are not concerned with illegal measures issued by an illegal party outside the country, and that these measures have nothing to do with Yemen or its interests, nor do they have anything to do with peace. They noted that these last changes should be a lesson to the rest of the mercenaries, as there is no legitimacy granted by the countries of aggression.

During the meeting, the Supreme Political Council praised the awareness of the Yemeni people, who became aware of all the conspiracies that the aggression is planning to undermine their will and steadfastness and the great sacrifices they made for the country, and that, along with their leadership, it will continue to expose the games, the latest of which is the rotation of mercenaries and their reproduction in a new and more complete form. The framework of the new formations are unsuccessful attempts to circumvent the will of the Yemeni people, led by the people of the provinces under occupation, noting that everyone who participates in this is part of the aggression against Yemen.

In its meeting, the Supreme Political Council reiterated its firm stance towards honorable peace as it is the natural right of Yemeni steadfastness and that there have not yet appeared clear indications of the existence of ‘real’ intentions towards reaching peace in Yemen by the countries of the coalition of aggression, directly sponsored by the US.

The meeting also affirmed that the correct peace conversation, in the beginning, is with the coalition of aggression, and that the humanitarian file and the lifting of the siege take precedence over the military and political aspects, assuring that these two cases will be the test and the real indicator of the trend towards the success of the armistice and the move to positive steps after it.

The Supreme Political Council affirmed that it seeks, by all means, to alleviate the suffering of the civilians, stressing that the continued obstacles to the arrival of oil derivatives ships compound their suffering and that the United Nations and the coalition of aggression bear responsibility for this and before that, they bear the responsibility of closing the port of Hodeidah to prevent the payment of half a salary to state employees every two months from oil revenues. At the same time, the coalition continues to loot Yemen’s oil and gas resources and the salaries of state employees.

The meeting also discussed the importance of the role of government institutions that work to alleviate the suffering of citizens, urging various state institutions to redouble their efforts, sense their responsibility, integrate their work and do them in the best way, especially in this holy month.

The council blessed the army, the people’s committees, the missile and drones forces for their great efforts, and urged them to be fully vigilant. Moreover, it called for the release of prisoners on the occasion of this holy month under the rule of all for all, blaming the other side for any derogation of this principle.