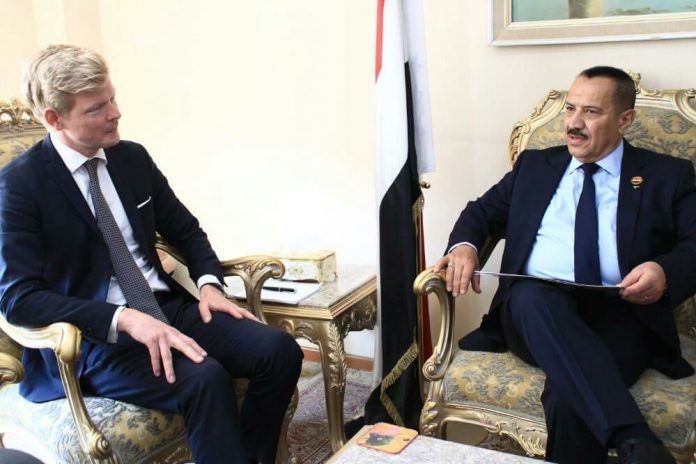 Foreign Minister of Foreign Hisham Sharaf has met with the Special Envoy of the Secretary-General of the United Nations to Yemen, Hans Grundberg.

During the meeting, Hisham Sharaf said that the leadership in Sana’a has repeatedly affirmed that “its hand is still extended towards a just and honorable peace for the Yemeni people.”

He noted that “the seriousness in demonstrating the intentions of peace on the other part, led by the Saudi-UAE aggression, must be translated into practical steps that must be felt by the Yemeni people who are suffering from the worst humanitarian disaster due to the aggression, and at the forefront of these steps facilitate the entry of oil derivatives ships and domestic gas to the Hodeidah’s port, and the reopening of Sana’a airport without any logistical or bureaucratic obstacles to the movement of commercial and civil flights and the movement of Yemeni citizens.”

Foreign Minister indicated that among these steps is also the repayment the salaries of all state employees without any exception, in order to alleviate the suffering of state cadres who have been deprived of their right to salaries for many years.

He confirmed that the implementation of these humanitarian steps would represent a positive message to the Yemeni people that there are realistic measures adopted by the UN and taken by the other side to confirm its orientation towards peace, in a way that prepares the atmosphere for reaching a comprehensive and sustainable political settlement under the auspices of the Special Envoy of the Secretary-General of the United Nations to Yemen.

The Foreign Minister furthermore stressed the importance of the other party’s commitment to the provisions of the temporary truce
that entered into implementation under the auspices of the United Nations, stressing the need to stop any and all violations.

For his part, the UN Envoy clarified that “there is an opportunity to consolidate the temporary truce and turn it into a comprehensive ceasefire, leading to a peaceful political settlement,” stressing that the Yemeni people deserve all support after their suffering.