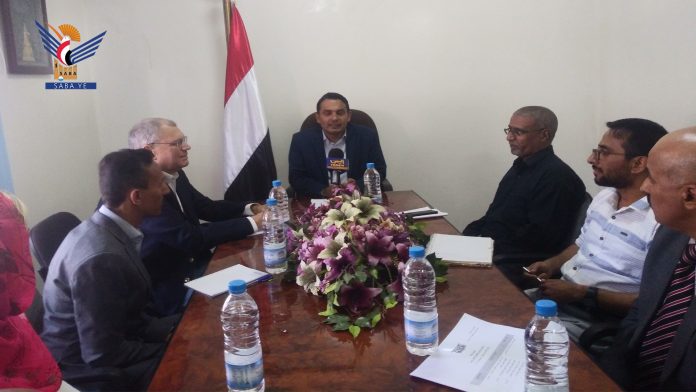 Acting Minister of Human Rights, Ali Al-Dailami, on Sunday discussed with the International Organization for Migration (IOM) Deputy Chief of Mission in Yemen, Matt Huber, aspects of cooperation in the humanitarian aspects and refugee affairs.

The issues related to the needs and requirements of refugees and the mechanisms that can contribute to alleviating their suffering were reviewed in the meeting.

The meeting touched on the repercussions of the Saudi-led coalition aggression and the siege in doubling the suffering of refugees, and the Saudi authorities’ export of large numbers of illegal immigrants to Yemen through mass deportations across the borders between the two countries.

In the meeting, the Acting Minister of Human Rights stressed the importance of integrating efforts between the ministry and the organization to serve the humanitarian aspects, referring to the measures taken by Yemen to curb human trafficking and the exploitation of refugees, including the issuance of the anti-trafficking law.

For his part, IOM official affirmed that everything would be done to strengthen the relationship with the Ministry of Human Rights, especially with regard to refugee issues.

Huber noted that the organization, in cooperation with the Ministry of Foreign Affairs and the Central Statistical Organization, seeks to produce statistics on the number of refugees in Yemen and their needs and requirements in order to reduce their suffering and contribute to solving their problems.