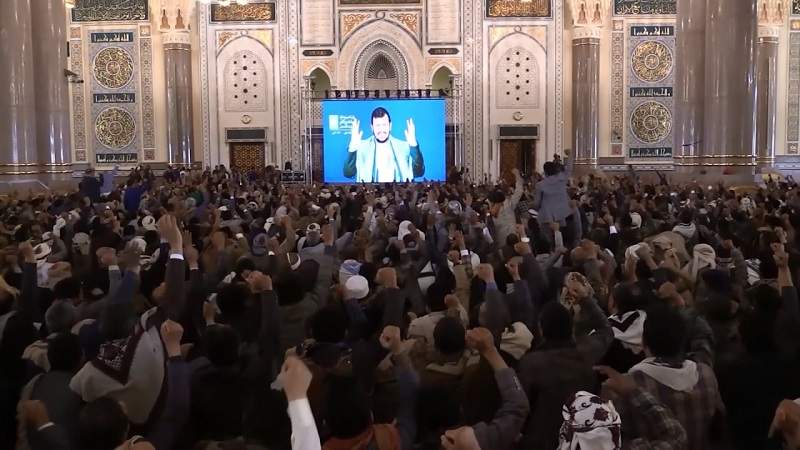 Sayyed Al-Houthi: We will continue our path to freedom and independence

The Leader of the Revolution, Sayyed Abdulmalik al-Houthi, met on Thursday with a large delegation of leaders and notables from Ibb province.

The Leader of the Revolution expressed the hope that Ibb province would present a model of coexistence that bridges gaps and builds bridges, saying “The official and popular side in Ibb are concerned with continuing their honorable activity and carrying out their responsibilities.”

Sayyed Abdulmalik al-Houthi said the US has started to build bases in Yemen’s Hadharmout, al-Mahrah and Aden.

“We, as people of Yemen, will continue down our path to achieve independence and freedom and to prevent foreign intervention in our country,” Sayyed Al-Houthi said.

He described the members of the council as “a bunch of criminals, traitors and thieves chosen by foreigners”.

Houthi added that traitors are those who let a Saudi or Emirati officer make decisions for them. He said when the enemies (the US, Saudi Arabia and the UAE) saw their hopes of reinstating Hadi shattered, they ditched him in a humiliating way.

Elsewhere in his comments, the leader of Yemen’s Ansarullah movement referred to the normalization of ties between some Arab states and the Zionist regime.

He said the move was part of a plot to prepare the region for the Zionist enemies. He added that those who are spearheading the aggression against Yemen are the same regimes that are advancing the campaign of normalization with the Zionists.