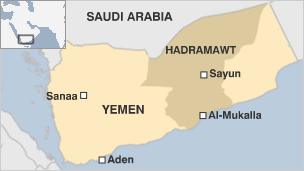 Protests continued for the second day in a row in the city of Mukalla, the capital of the Hadhramaut, an oil province, in eastern Yemen.
Local sources said that dozens of angry youths blocked the port of Mukalla to demand better services, including electricity, during the last hours of Monday. The protesters carried banners calling for the improvement of basic services, denouncing the deteriorating living conditions.

On May, Angry protesters blocked the main roads in the city of Mukalla, the capital of Hadhramaut governorate to denounce the water cuts. According to local sources, protesters in the Al-Dis area blocked streets with stones and waste containers for several hours, and prevented the passage of vehicles, denouncing the continuing water crisis in a number of Mukalla neighborhoods for weeks.

They called on the local authority and the Water and Sanitation Corporation to quickly provide water and alleviate their suffering.
Many cities and governorates subject to the US-Saudi aggression are witnessing a significant deterioration in living life and all services, most notably the electricity and water cuts.

Saudi Arabia and a number of its regional allies, backed by the United States and European powers, launched the war on Yemen in March 2015, with the goal of bringing the government of former Yemeni president Abd Rabbuh Mansour Hadi back to power.

The war has left hundreds of thousands of Yemenis dead and displaced millions more. It has also destroyed Yemen’s infrastructure and spread famine and infectious diseases there.

The US-Saudi aggression continues to target neighborhoods and populated areas and destroy the infrastructure and capabilities of the country, in light of a suspicious international silence.