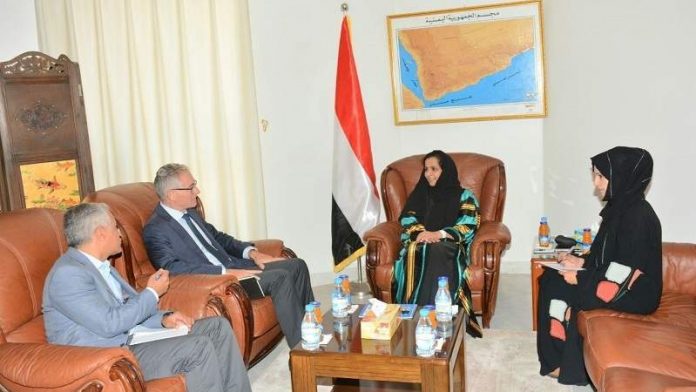 Minister of State Alia Abdullatif discussed with the resident representative of UNICEF in Yemen Philippe Doamel the humanitarian aspects, foremost of which are the challenges facing the education sector.

In the meeting, Minister Abdullatif referred to the humanitarian challenges resulting from more than seven years of aggression and the US-Saudi-Emirati siege on various aspects of human daily life. As well as the effects of the suspension of salaries for the employees of the state’s public units, including teachers, who have been facing dire living conditions since the transfer of the Central Bank of Yemen’s jobs to its branch in Aden Governorate.

She stressed the importance of the role of UNICEF and other humanitarian organizations in supporting the education sector and contributing to the government’s effort to alleviate the suffering of teachers.

Abdullatif touched on the need for joint action to reduce student dropouts. Especially in the basic stages of their classrooms, as a result of the difficult living conditions of their families. She called on UNICEF, based on the nature of its job and its main objectives, to search for the appropriate formula in coordination with the Ministry of Education, and to provide assistance to the poorest and most destitute students in society.

In turn, the UNICEF representative to Yemen affirmed that the organization would continue to support the education sector according to its available capabilities, pointing out that supporting education is one of their most important basic tasks.

He expressed his understanding of the nature of the challenges faced by teachers as a result of the current exceptional circumstance.

Saudi Arabia and its allies launched its war against Yemen in March 2015 in order to restore power in Yemen to Riyadh’s favorite officials.

The military campaign has stopped short of the goal, while killing tens of thousands of Yemenis and turning the entire country into the scene of the world’s worst humanitarian crisis.

According to a report by UNICEF, two million children are out of school, including almost half a million who dropped out since the Saudi coalition started in March 2015. The education of another 3.7 million children now hangs in the balance as teachers’ salaries have not been paid in over five years.

Saudi coalition and siege, which led to poverty, has deprived millions of children in Yemen of their right to education. The aggression’s violence, displacement and attacks on schools are preventing many children from accessing school. With teacher salaries going unpaid for over five years, education quality is also at stake.