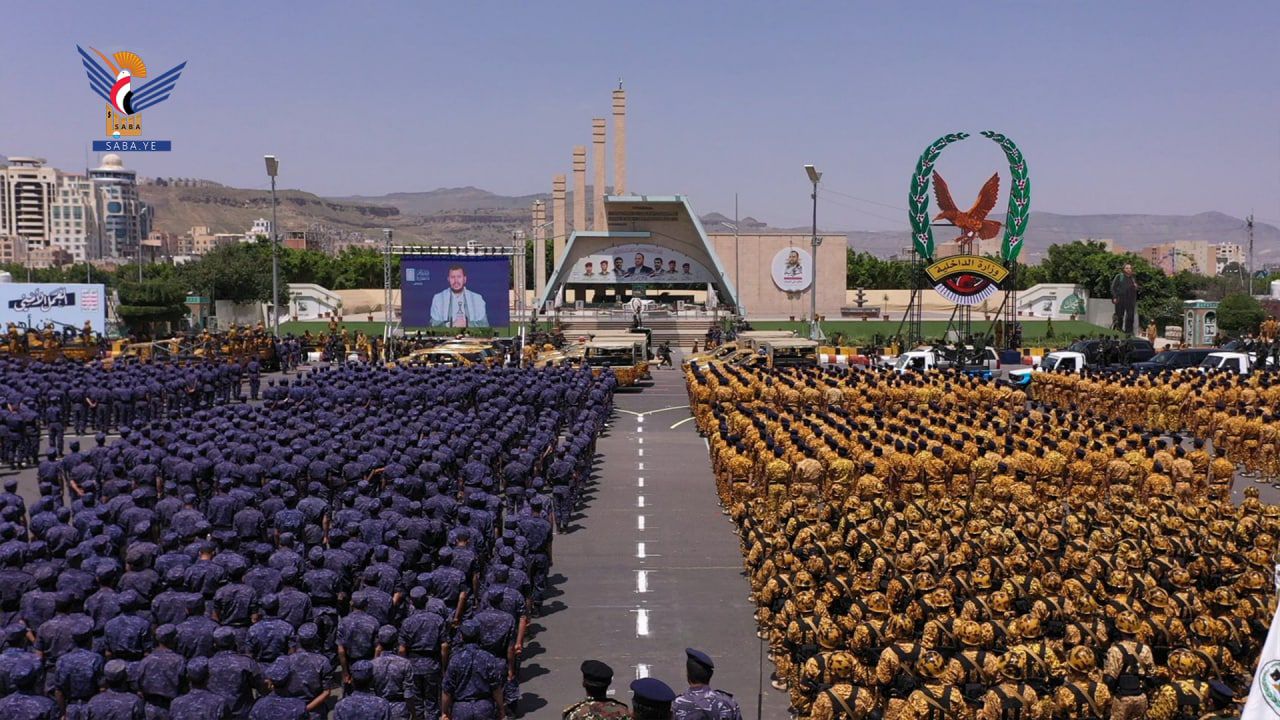 Ansarollah Leader Mr Abdul-Malik Badr al-Din al-Houthi : “Yemen’s security is in interest of Arab and Islamic peoples, and we are ready to coordinate in this aspect”

He stressed that the security of Yemen is in the interest of all Arab and Islamic peoples, and that Yemen is present to contribute to security cooperation for the benefit of the nation.

In his speech during the solemn forces parade and units of the Ministry of Interior today in Sana’a on the occasion of the eighth anniversary of the September 21 revolution, the Leader of the Of Ansarollah declared,

Security is a necessity for the stability of life and a mainstay for renaissance and construction, and is one of the greatest blessings that God bestows upon His servants,Pointing out that security is in the peace and holiest of responsibilities, and if its construction, its starting points, and its foundations are faith, moral and humanitarian.

He said: “In the solemn presentation, we extend our thanks, pride and appreciation to the leadership of the Ministry of Interior, all its employees and affiliates, and its various formations and security services. We also pay tribute to the brothers in these symbolic units who implemented this solemn offer.”

The Leader of the Ansarollah indicated that through the presentation and the various activities and efforts made by the Ministry of Interior to build and develop the institution, which is a twin of the Ministry of Defense in protecting people, preserving its security and stability and confronting enemies conspiracies ,We emphasize a number of facts and messages, the most important of which is that the Ministry of the Interior, and its various formations, are moving within the framework of their sacred duties to protect the people,

Also, the consolidation of security and stability, by relying on God first, and based on a great practical experience and a balance of achievements, to thwart the enemies’ criminal endeavors to target Yemeni people.

He explained that the aggression coalition, in addition to its comprehensive military aggression and its perpetration of genocide through its raids, targeted all gatherings in mosques , markets, hospitals, schools and various social events.

Before the military battle, the aggression coalition opened an aggression targeting Yemeni people for their security and stability and used and mobilized all its means and tools to achieve its diabolical goals.

He pointed out that the enemy worked hard, using takfiris and other various criminal formations to implement many criminal schemes, with the bombings that were targeting Yemeni people in all their ways of life.

But aggression’s tries failed in most of them, thanks to God first, and as a result of the efforts made by the Ministry of the Interior, its formations, and the various security agencies that cooperated with it in confronting the conspiracies of the enemies.

Sayyed Abdul-Malik Badr al-Din al-Houthi stated that, in addition to the enemy’s efforts to cause bombings and the collective targeting of Yemeni people, there were major enemy activity and plots aimed at carrying out many assassinations of state and country men.

And people of the various streams and components that have a clear position on aggression, even on a broader level than that, but the aggression also failed in most of its endeavors in the direction.

He said: “The enemy also had great activity and many and multiple plots in which it moved its financial capabilities and its criminal means and hands in an attempt to sabotage, foment chaos and strike security and stability under political headings, as well as at the level of social issues and problems.”

Sayyed pointed out that “the enemy had extensive activity and many plots for which it moved many criminal cells within the framework of the organized crime targeting Yemeni people.”

On other  hand , He indicated that “organized crime included various forms of crimes, such as murder, robbery, looting, theft, embezzlement and attempts to distort the security services, in addition to the tireless work to spread drugs, which also failed in many of them, thanks to God and the great efforts of the Ministry of Interior and its various formations and carrying out their tasks from faith, humanitarian and moral premises. and its high sense of responsibility.

Sayyed Abdul-Malik Badr al-Din al-Houthi stressed that “if the enemy succeeded , found an open and easy environment in which no one could confront it, the diaries of our people would have turned into horrific brutal and criminal massacres through the Takfiris and the rest of the criminal formations and hands on which it depends in targeting our people.”

Sayyed Abdul-Malik Badr al-Din al-Houthi reiterated the importance, great role and sacred mission of the Ministry of Interior, although it was also