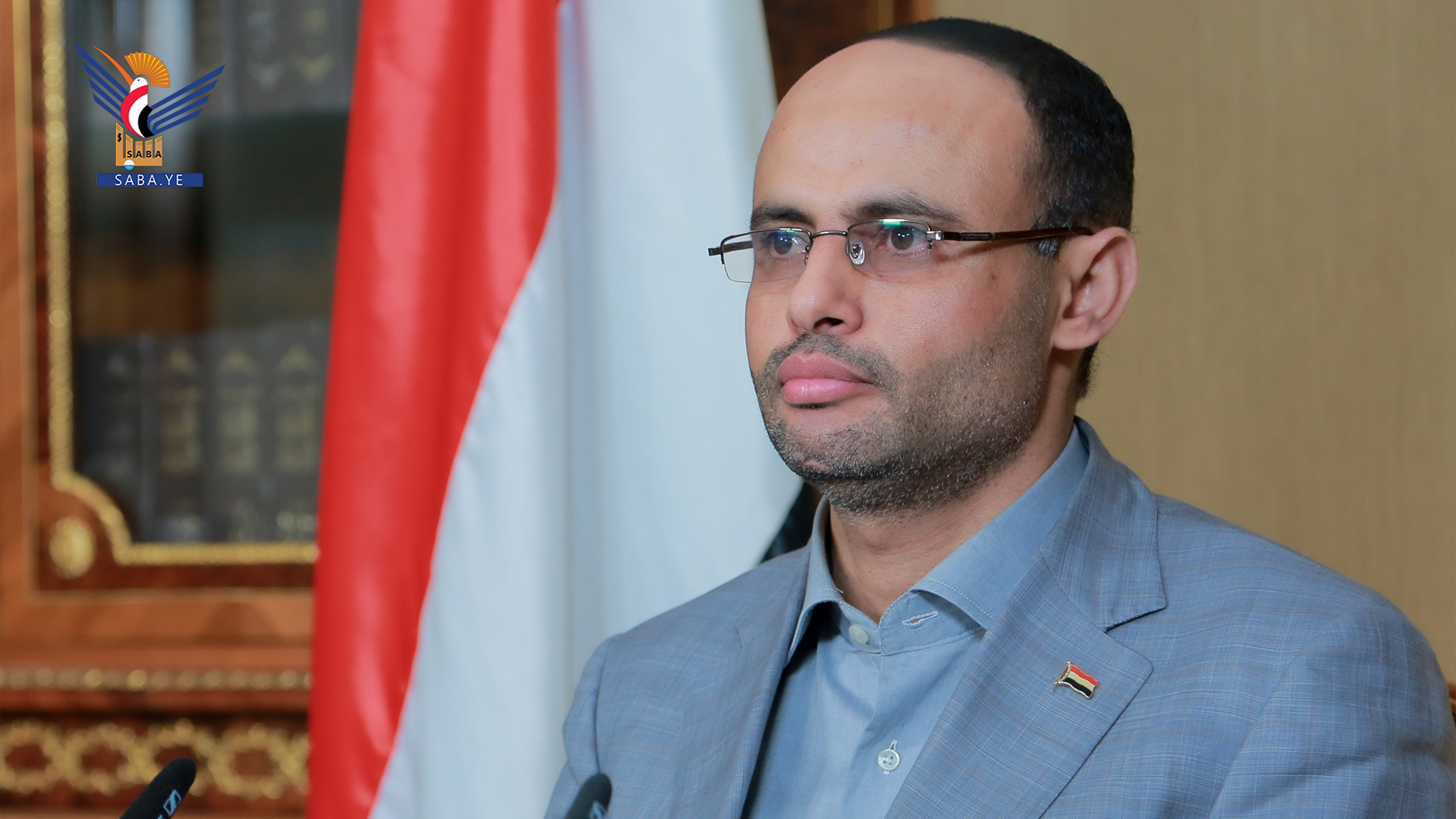 His Excellency Field Marshal Mahdi al-Mashat, President of the Supreme Political Council, announced the transition of the September 21 revolution from the phase of the struggle for existence and survival to the phase of the revolution that comes to stay.

President al-Mashat said in his speech on the occasion of the eighth anniversary of the glorious September 21 revolution, “We are now fighting for liberation and construction.”

Including intensive work for the peace that guarantees the country’s sovereignty, independence, security, stability, unity and territorial integrity and the wisdom of the Leader of the Revolution, we are currently making intense and sincere efforts through all political, diplomatic, military and security tracks to achieve all of this.

He congratulated the leader of the revolution, Sayyed Abdul-Malik Badr al-Din al-Houthi, the armed and security forces, all members of state and government institutions, and the Yemeni people on this occasion.

President Al-Mashat touched on what preceded the eternal revolution from the precursors of the old decades, and what happened in Yemen for decades, including events, wars, crises, and a catastrophic failure in building the desired Yemeni state.

And what that long era led to was the decline in all fields, as well as what followed the revolution from the resorting of the former regime’s symbols to bullying abroad and bringing aggression and siege against Yemen and its people, in that shameful way.

He pointed out that the glorious September 21 revolution represented and still is a revolution of religious, national and human necessity.

He affirmed that after eight years of the eternal revolution’s struggles, the Yemeni people have the right to be proud of their steadfastness and sacrifices.

President Al-Mashat pointed out that the revolution made many creative transformations in the methods of political thinking and construction perceptions, and it became based on a heroic legacy and an important and inspiring practical experience that earned it many promising advantages.

He singled out two rare advantages of the revolution, the first of which is the advantage of growth away from external dictates and tutelage to reap the merits of independent national decision, and the second is the advantage of the field and actual movement, an advantage that puts us in front of a revolution whose perceptions and experiences have matured under fire and siege.

He urged everyone to continue efforts in all fields and work streams, in order to consolidate the values of brotherhood, love, tolerance and coexistence in the community, and to continuously raise the state of public awareness regarding all the requirements and requirements of the stage.

He stressed the great concern for peace and openness to all efforts and good endeavors, and full readiness to exchange concerns, and to ensure legitimate interests with the Arab and Islamic environment and with all countries of the world recognized by the Yemeni people.

President Al-Mashat called on the war leadership on the other side to jointly move from strategies of war and hostile policies to strategies and policies of peace.

Crossing towards reforming and correcting the decisions, classifications, practices and hostile perceptions built on war strategies, which are in fact either incorrect or exaggerated, leading to a complete end to the aggression, siege and occupation.

He also called on the international community, the Security Council and the United Nations to support options for serious and genuine peace, and the immediate start to modify the behavior that they have been doing as obstructing, frustrating and biased behavior, it does not help at all to build confidence and achieve peace, as it is among the direct factors behind the prolongation of the war, and the reasons that usually transform the course of negotiations from peace negotiations to negotiations of surrender, and at best to tactical negotiations to gain time or for the purpose of removing embarrassment and absorbing pressure , which are descriptions that must be abandoned in favor of peace.
He stressed that war is not a civil war, and everyone knows the source, nature and reality of what is called legitimacy.

He made it clear that the time for peace has come, and in the context of peace, the outsider should not lie and believe it indefinitely, or take the connotations of the description as sustainable obstacles in the way of peace, forgetting that the description is completely incorrect.

President Al-Mashat called on the war leadership on the other side to expedite the practical engagement in confidence-building measures, starting with the necessary steps on the humanitarian and economic sides at the forefront of that is lifting the siege on Yemeni ports and airports, controlling the resources of oil and gas resourc