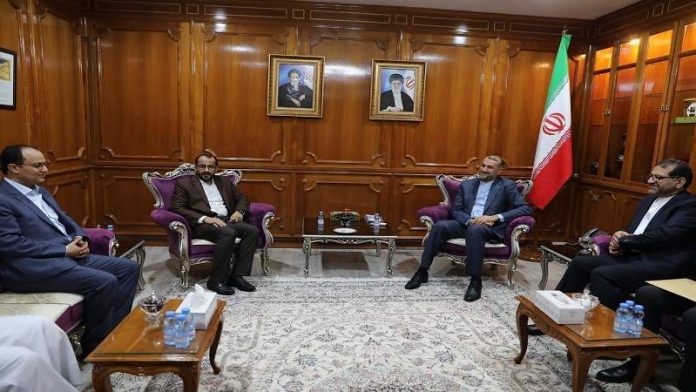 Iranian Foreign Minister Hossein Amir-Abdollahian met with Yemen’s National Negotiating Delegation in Oman, Muscat.
The head of National Delegation, Mohammed Abdulsalam, appreciated the efforts of the Islamic Republic of Iran in supporting the people of Yemen.

For his part, Amir-Abdollahian praised the steadfastness of the people of Yemen in defending its rights, stressing Tehran’s support for its endeavors in this regard. He stressed the importance of lifting the blockade on Yemen as a humanitarian necessity so that the people of Yemen can enjoy normal living conditions.

The Iranian Foreign Minister also also paid tribute to Hassan Irloo, the former ambassador of the Islamic Republic of Iran in Yemen. His first death anniversary was observed last week.

Amir-Abdollahian hailed him as “a martyr of Yemen” and reaffirmed the determination of the Islamic Republic of Iran in supporting the people of Yemen.

Yemen has been reeling under the Saudi-led coalition’s devastating war since March 2015, which has spawned the world’s worst humanitarian disaster in the Persian Gulf country.

In October, the United Nations announced the end of a truce in the country, paving way for no-holds-barred aggression from the occupying coalition supported by the Western powers.

The Yemeni Army blames Riyadh and its Arab and Western allies for breaching the terms of the UN-brokered ceasefire.

Yemeni government officials insist that the US-Saudi aggression must end its blockade and allow the resumption of salary payments to all civil servants in order to commence political negotiations.

Abdulsalam told Al-Masirah television network on Monday that the ceasefire will be restored once the brutal siege on the country is lifted and the occupying forces are expelled.

He also informed that an Omani delegation held constructive negotiations with the Leader of Revolution Sayyed Abdulmalik Al-Houthi, President Mahdi Al-Mashat, and Chairman of the Joint Chiefs of Staff Mohammad Abdulkarim al-Ghamari.

The delegation visited Yemen to hold talks with high-ranking members of the Ansarullah resistance movement on extending the UN-brokered nationwide ceasefire and halting the Saudi aggression.

Abdulsalam hailed Oman’s efforts in helping bring peace and stability back to Yemen and providing humanitarian assistance to Yemenis to alleviate their suffering.