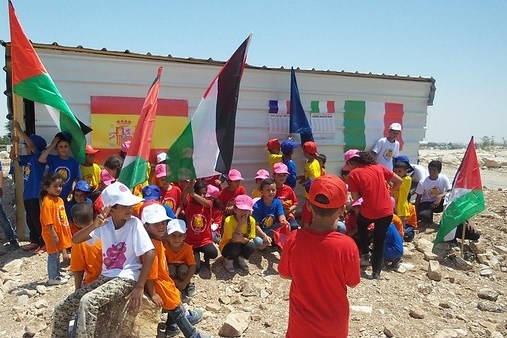 Wafa reported that staff from Israel’s civil administration, backed by Israeli army, reportedly stormed the village and ordered its residents to leave their homes.
Jabal Al-Baba, according to Wafa, consists of 100 buildings, 58 of which are houses, while the rest are structures used for agriculture. “Because the community is unrecognized, the people in Jabal al-Baba live without electricity and get water only from tanks filled by trucks,” Wafa said.
Israeli forces have demolished dozens of homes in Jabal al-Baba area, many of them built with assistance from the EU and humanitarian organizations, over the past few years.
In August, Israeli forces demolished a Kindergarten school in the village.
The hill is populated by some 55 Bedouin families who have inhabited the area for 65 years, and face constant threat of being expelled from their homes.
Some 90 Palestinian Bedouins, the majority of them children, were left homeless when Israeli forces disassembled EU-donated mobile homes in the Jabal al-Baba in May 2016.
Jabal al-Baba, like other Bedouin communities in the region, is under threat of forcible transfer by Israel for being located in the contentious “E1 corridor” set up by the Israeli government to link annexed East Jerusalem with the mega settlement of Maale Adumim.
Israeli authorities plan to build thousands of homes for Jewish-only settlements in E1, which would effectively divide the West Bank and make the creation of a contiguous Palestinian state — as envisaged by the two-state solution to the Palestinian-Israeli conflict — almost impossible.
Rights groups and Bedouin community members have sharply criticized Israel’s relocation plans for the Bedouin residing near the illegal Israeli settlement of Maale Adumim, claiming that the removal would displace indigenous Palestinians for the sake of expanding Israeli settlements across the occupied West Bank in violation of international law.
Source: Website
Continue Reading
‘to300BedouinDELIVERevacuationforcesinIsraeli
115
Share FacebookTwitterGoogle+ReddItWhatsAppPinterestEmailLinkedinTumblrTelegramPrint

Saudi Warplanes Hit a Home in Saada, Casualties Between Killed and Wounded