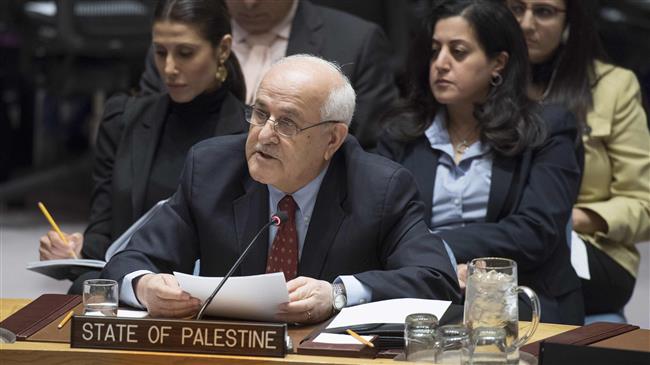 China, Arabs could be among mediators of talks with Israel: Palestine envoy

The Palestinian envoy to the UN suggests that China and Arab League (AL) could also be part of any future “peace process” on the Israeli-Palestinian conflict, which should be “collective” and not dominated by the US.

“We’re saying a collective approach involving several players at minimum would have a better chance of succeeding than the approach of only one country that is so close to Israel,” Riyadh Mansour told reporters on Thursday.

The so-called peace process could involve the UN Security Council, said the diplomat, adding that the Middle East Quartet of mediators, namely the UN, the EU, Russia and the US, could also expand to include China and the Arab League.

“The Quartet plus China plus the league of Arab states plus maybe others … we could also look at that,” Mansour said.

The comments come amid anger among Palestinians at US President Donald Trump’s latest hostile measures in favor of Israel, including his decision last December to recognize Jerusalem al-Quds as the “capital” of the regime and begin work to transfer Washington’s embassy from Tel Aviv to the occupied city.

Trump’s declaration prompted Palestinian President Mahmoud Abbas to formally declare that Palestinians would no longer accept the US as a mediator to resolve the decades-long conflict as Washington is “completely biased” towards Tel Aviv.

In response to Abbas’ position, the Trump administration said in January that it would withhold $65 million of a $125 million aid installment to the United Nations Relief and Works Agency for Palestine Refugees (UNRWA).

All rounds of talks between Israelis and Palestinians so far have stalled mainly due to the Tel Aviv regime’s refusal to stop its unlawful settlement expansion on occupied territories.

Mansour further said such collective approach could also “of the nature of the French Paris conference or international conference.”

Early last year, scores of countries joined a gathering in Paris to discuss potential means of addressing the conflict.

US President Donald Trump has said his administration had a peace proposal in the works.

Sounding dismissive of any renewed US push at dictating the process, the Palestinian official said, “The old approach failed, and we’re looking for a new approach.”

“But of course if they started with ‘Jerusalem [al-Quds] is off the table’ and punishing UNRWA (the United Nations Relief and Works Agency)… what is left on the table?” he asked.

“They lost the neutrality that is required of any broker that helps two parties to reach a peace treaty,” Mansour said.

After break with the US as a peace broker, the Palestinian Authority sent delegations to China and Russia to ask them to take a greater role in the Middle East negotiation process.

Russian President Vladimir Putin and Abbas plan to discuss a possible new mediation mechanism to replace the Quartet when they meet next week, the Interfax news agency said Wednesday, citing a Palestinian diplomat in Russia.

In late January, Abbas addressed an African Union meeting in Ethiopia’s capital Addis Ababa, also calling on African states to join a multilateral mechanism to discuss the conflict between Israel and the Palestinians.

US has no plan to contribute to rebuilding post-Daesh Iraq: Officials