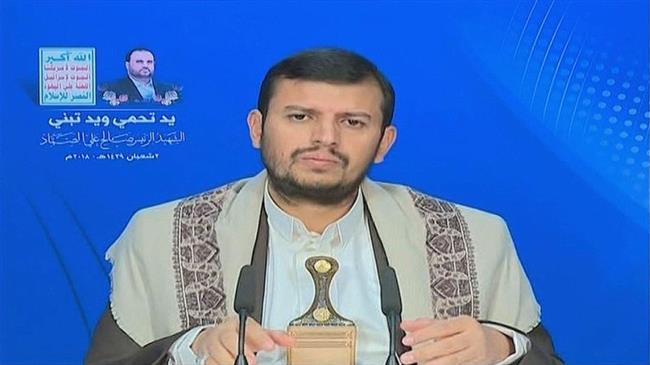 US had a major role in assassinating Yemeni President al-Sammad: Sayyed Houthi

Leader of Yemen’s Houthi Ansarullah movement Abdul-Malik Badreddin al-Houthi has held the United States chiefly responsible for the recent assassination of the country’s head of the Supreme Political Council, Saleh al-Samad, in the western coastal province of Hudaydah.

Addressing his supporters via a televised speech from the Yemeni capital Sana’a on Saturday, Sayyed Houthi stated that Americans played the leading role in Samad’s murder, and their fighter jets closely monitored the entire phases of the operation.

He added that aggressors were killing innocent Yemeni women and children on a daily basis, and their crimes had now become an indispensable part of life in the crisis-hit Arab country.

“Having received the green light from Washington, aggressors are carrying out their appalling crimes against Yemenis as part of their military tactics,” the Ansarullah chief pointed out.

He further noted that Saudi Arabia and its allies were committing acts of “genocide” in Yemen by targeting civilians and residential neighborhoods.

Sayyed Houthi also censured the Saudi-led coalition over assassination of Samad, emphasizing that the move was in contravention of international law.

“Samad never took advantage of his position. His primary goal was to serve the interests of the entire Yemeni nation. Officials from the Ansarullah movement will do their utmost to follow in his suit,” Sayyed Houthi commented.

“Since the beginning of the military onslaught against Yemen, the related developments have pointed to the heroic resistance and steadfastness of the Yemeni nation against the Saudi-led aggression. Aggressors proved their baseness by dispatching warplanes to bombard Samad’s funeral,” he said.

Sayyed Houthi added that Samad’s murder boosted public resilience in the face of aggressors, and consolidated their determination for self-sacrifice.

“Aggressors will obtain adverse results out of the assassination. They had planned Samad’s murder in the hope of sowing the seeds of discord and division among Yemenis, and breaking their will. Nevertheless, his martyrdom bolstered their morale and added to their rage against Saudi Arabia and its allies,” the Ansarullah leader underlined.

He concluded that aggressors were weighing plans in order to bring more mercenaries into Yemen.

He noted that a US MQ-9 Reaper drone fired a missile into his residence in the Red Sea port city of Hudaydah, located 150 kilometers southwest of Sana’a, on April 19.

The Yemeni Ministry of Human Rights announced in a statement on March 25 that the Saudi-led war had left 600,000 civilians dead and injured since March 2015.

The United Nations says a record 22.2 million Yemenis are in need of food aid, including 8.4 million threatened by severe hunger.

A high-ranking UN aid official recently warned against the “catastrophic” living conditions in Yemen, stating that there was a growing risk of famine and cholera there.

He added, “People’s lives have continued unraveling. Conflict has escalated since November driving an estimated 100,000 people from their homes.”

Ging said cholera had infected 1.1 million people in Yemen since last April, and a new outbreak of diphtheria had occurred in the war-ravaged Arab country since 1982.