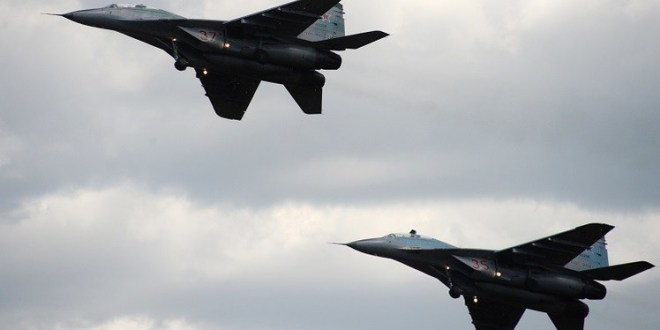 Leftist leader of Britain’s Labour Party Jeremy Corbyn said the US-UK-France missile strike on Syria was “legally questionable,” and its rationale could be used to justify bombing Saudi Arabia over its devastating war on Yemen

BEN NORTON: Jeremy Corbyn, the leftist leader of Britain’s Labour Party, has come out forcefully against the UK government for joining the United States and France in a coordinated attack on the Syrian government. The head of the opposition to the administration of conservative Prime Minister Theresa May said the joint missile strikes in Syria were, quote, ‘legally questionable,’ echoing legal experts who say the attack violated international law.

BEN NORTON: Corbyn pointed out that if one were to be consistent with the same rationale used to justify the missile strike on Syria, one could just as well justify bombing Saudi Arabia over its devastating war on Yemeni civilians.

JEREMY CORBYN: Does, for example, the humanitarian crisis in Yemen entitle other countries do arrogate themselves the right to bomb Saudi airfields or their positions in Yemen, especially given their use of banned cluster bombs and white phosphorous?

BEN NORTON: The leftist Labour Party leader added that the United Kingdom and its close ally the U.S. have played a key role in supporting the Saudi monarchy in its catastrophic bombing and blockade of Yemen.

JEREMY CORBYN: Three United Nations agencies said in January that Yemen was the worst humanitarian crisis in the world. So will the Prime Minister today commit to ending support to the Saudi bombing campaign and arms sales to Saudi Arabia?

BEN NORTON: Jeremy Corbyn emphasized that there still has not been an independent investigation into the alleged use of chemical weapons in Douma, Syria in early April. He likewise noted that it is not just the Syrian government that has used chemical weapons in the conflict, but also the foreign-backed Salafi jihadist rebels the Syrian army is fighting.

JEREMY CORBYN: While much suspicion, rightly, points to the Assad government, chemical weapons have been used by other groups in the conflict. For example, Jaysh al Islam, which was reported to have used gas in Aleppo in 2016 amongst other groups. It is now vitally important that the OPCW inspectors who arrived in Damascus on Saturday are allowed to do their work and publish their report and their findings, and report to the United Nations Security Council.

BEN NORTON: The head of the opposition also criticized conservative Prime Minister Theresa May, implying that her government is siding with the U.S. Over its own parliament. Corbyn called for a war powers act that would give lawmakers the ability to prevent future disastrous wars like Iraq, Libya, and Syria.

JEREMY CORBYN: This statement serves as a reminder that the prime minister is accountable to this Parliament, not to the whims of the U.S. president. We clearly need, we clearly need a war powers act in this country to transform a now broken convention into a legal obligation. Her predecessor came to this house to seek authority for military action in Libya and in Syria in 2015, the house had a vote over Iraq in 2003. There is no more serious issue than the life and death matters of military action. It is right that Parliament has the power to support or stop the government from taking planned military action.