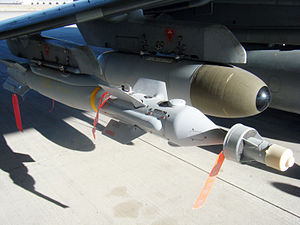 The Spanish newspaper El Mundo said Spain had decided to freeze a package of smart bombs contracted with Saudi Arabia, which authorities suspect would be used in the war on Yemen.

The Spanish radio “Sir” confirmed that the current government decided to cancel the deal in July due to fears of using the bombs in the war on Yemen.

The deal includes the export of 400 high-precision bombs to Saudi Arabia for more than nine million euros ($10.6 million).

Spain is the fourth exporter of arms to Saudi Arabia, which led to the sparking of various protests by several human rights organizations who are accusing the Spanish monarch of facilitating such deals because of his good relationship with the Saudi royal family.

The Spanish Ministry of Defense confirmed the cancellation of the deal.

It was reported that there is an anticipated meeting between civil and human rights associations and the State Prosecutor at the Spanish Ministry of Commerce, where associations would ask for stopping arms exports to Saudi Arabia and Israel.

One of the most important military deals signed between Riyadh and Madrid – which associations have requested for its immediate halt- is the manufacture of five warships in the city of Cadiz in Spain.

The Spanish government has previously pledged to review the safeguards policy that binds the second party, the most important of which is not to use weapons exported to Saudi Arabia outside its territory.

Meanwhile, the German government announced in January that Berlin had halted arms exports to countries involved in Yemen’s three-year-old war.

“Germany is currently not issuing any permits to export weapons that are incompatible with the results of the exploratory talks of the new government,” German government spokesman, Steffen Seibert, said in a press statement, without giving any further details.

The paper, which resulted from the exploratory talks between the Christian Union and the Social Democratic Party to form a coalition government then stipulated that “the German government will not issue henceforth any permits to export weapons to countries participating in the war in Yemen.”

In the same month, Norway announced that it had suspended its arms and ammunition exports to the United Arab Emirates because of its participation in the war on Yemen.

“The development of the conflict in Yemen in the fall of 2017 was serious and there is great concern about the humanitarian situation,” the Norwegian Foreign Ministry said in a statement.

The capital of Norway, Oslo, explained that the suspension of arms exports is a preventive measure since nothing indicates that Norwegian weapons were used in Yemen while emphasizing that it does not sell any kind of weapons to Saudi Arabia.

Norway’s decision comes in the wake of the European Union’s non-binding decision of February 2016, which stresses that arms should not be sold to the Saudi coalition and its allies because of its violations in Yemen.

The intervention of Saudi Arabia and the UAE militarily in Yemen comes under bringing the power back to the Yemeni ex-President, Abdrabbuh Mansur Hadi, who was exiled in the Saudi capital, Riyadh for over three years, after forces from the army along with Ansarullah Houthis movement took control of the capital, Sana’a.

The military operations of the Saudi coalition were criticized for bombing several MSF hospitals and killing thousands of civilians, which the coalition denied and accused the Houthis of doing so.