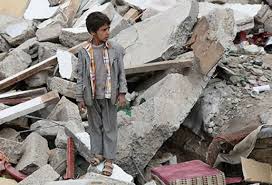 The Saudi-led coalition, backed by the US,  continued on Tuesday to conduct air raids and bombardments on a number of Yemeni provinces and areas, leading to material damage to property.

Meanwhile, an attack that consisted of artillery and rockets, hit populated villages in the two border districts of Razih and Shada.

To conclude with Hajjah province, the US-backed coalition launched five raids on Mustbaa.