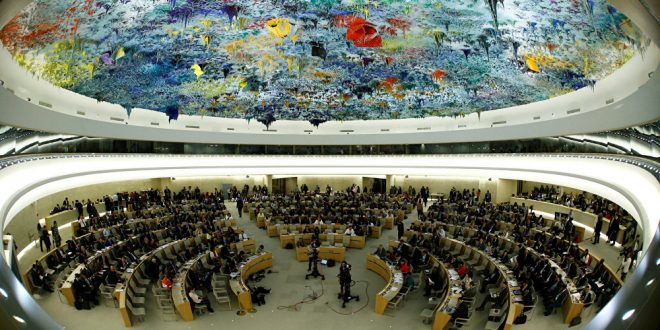 UN agrees to extend the investigations into war crimes in Yemen: Report

The United Nations Human Rights Council agreed on Friday, to extend the investigations into war crimes in Yemen, despite opposition from Saudi Arabia and several allies of the kingdom.

Twenty-one out of 47 voted in favor of prolonging a resolution that states an inquiry into human rights in Yemen. It is worth mentioning that 8 countries opposed the resolution while 18 countries decided to not vote on the resolution.

Last month, investigators submitted a report that concluded that all parties in the Yemeni conflict may have committed “war crimes”.

The Saudi-led coalition has sharply criticized the report of the investigators, accusing them of being biased.

It is worth mentioning that a group of Arab countries in the Human Rights Council supported another resolution, which appointed the National Human Rights Commission in Yemen, ” formed by exiled ex-president Hadi,” to take the upcoming investigations in Yemen, but this proposal did not win the support of many countries due to the lack of confidence in the committee formed by the government of resigned Hadi.

The resolution, supported by the Group of European countries, and Canada, calls for the experts to submit a new report next September.

Members of the Committee said they needed more time to document all of the violations committed during the conflict in Yemen, since 2015, which has killed at least 10,000 people, mostly civilians, and triggered the world’s worst humanitarian crisis, according to the United Nations.

The use of voting reflects the extent of division on the issue among the countries within the council, which usually seek consensus on major decisions.

Human Rights Watch said the vote “sends a clear message that it stands with Yemeni civilians.”

“The United Nations Human Rights Council has stood firmly against the shameful efforts of the Saudi-led coalition, who tried to end the resolution,” said John Fisher, director of the HRW organization in Geneva.

Moreover, an official source in the Yemeni Ministry of Foreign Affairs is in favor of extending the mandate of the team of regional and international experts to investigate human rights violations in Yemen.

The source said in a statement to Saba News Agency that the National Salvation Government, while insisting on the formation of an independent international commission of inquiry, welcomes any independent and impartial international effort aimed at exposing violations and crimes committed by the forces of the coalition led by Saudi Arabia and the UAE, also demanding that the guilty must face trial.

The source pointed out that the countries of the coalition and its mercenaries launched a sweeping campaign against the members of the group of experts in order to question their credibility and neutrality and the report presented to the UN High Commissioner for Human Rights, pointing out that this is an extension of the policy pursued by Saudi Arabia since the beginning of the war on Yemen and the impunity of accountability and punishment using all means of encouragement and intimidation.

The source also noted that the continuation of the Saudi-led war, the siege on Yemen, war crimes, flagrant violations of international humanitarian law and international human rights law, and the inability of the Panel of Experts to investigate all crimes committed, necessitated the renewal of the Panel’s mandate by the Human Rights Council.

The official source at the Ministry of Foreign Affairs confirmed the readiness of the Government of Salvation in Sana’a to cooperate with the team of experts and provide the necessary facilities in order to complete the investigation of the war crimes committed by the countries of the US-backed alliance and its mercenaries against the Yemeni land and human.

In addition, the source called on the United Nations General Assembly to suspend the membership of Saudi Arabia and the United Arab Emirates in the Human Rights Council after the report of the Group of Experts issued by an independent international body proved that they committed gross and systematic violations of human rights pursuant to General Assembly resolution 60/251, which established the Human Rights Council.

Meanwhile, the source renewed the call for the formation of an independent and impartial international commission with broad powers and a sufficient period of time to investigate all crimes committed in Yemen by the countries of the coalition since March 26, 2015, which would expose the perpetrators of these crimes into states and individuals to bear accountability and punishment.

The source again demanded that countries that continue to supply arms to the Saudi-led coalition stop so as not to use these weapons in the killing of civilians and the bombing of civilian property in Yemen.

The source expressed thanks and appreciation to the members of the Human Rights Council, which adopted and voted in favor of the draft resolution, which included extending the mandate of the Group of Experts, especially the Netherlands and Canada, despite the pressure exerted by the countries of the coalition led by Saudi Arabia and the UAE.

The official source at the Foreign Ministry praised the honorable positions of many human rights organizations and called on the rest of the world to review their policies and stand by the side of human values and human rights principles.

Speaking of standing by the side of humanitarian values, Yemeni and US activists held a protest rally in front of the United Nations General Assembly headquarters to ask the Commission to take responsibility for war crimes and human rights violations in Yemen in conjunction with its seventy-third annual session.

The activists raised banners condemning the crimes of the Saudi-UAE alliance in Yemen and demanding the United Nations and the international community to intervene immediately to stop them. They also chanted slogans against the alliance, including “Down with Saudi Arabia.”

The activist in the protest, Mohammed al-Zubaidi, said in a statement to the Yemeni news that the protest was part of a series of protests carried out by the Yemeni community in New York to deliver the message of the Yemeni tragedy to the world.

He pointed out that the implementation of this protest in conjunction with the annual session of the General Assembly of the United Nations aims to call on the United Nations to play its role properly in neutralizing civilians and stopping air strikes from targeting the Yemeni people without exception.

Leaked pictures: what forces the collapse of Yemeni riyal in Aden