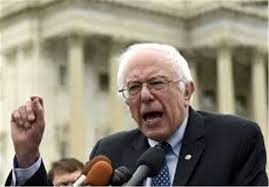 The Saudi-led coalition supports Daesh, al-Qaeda in Yemen: US Senator

US Senator Bernie Sanders has called the Saudi-led war on the impoverished Yemen a “moral disaster” for Washington, saying counter-terrorism operations against “violent extremists” such as the al-Qaeda and the Daesh terrorist groups in Yemen has undermined by the military campaign .

The 77-year-old Vermont independent also said the White House must urgently redefine its relationship with Riyadh, according to an article in The New York Times on Wednesday

“Saudis do not have a blank check to continue violating human rights” said Sanders, adding that their war in Yemen, which started in 2015, has “created a humanitarian disaster in one of the world’s poorest countries.

Also in the same article, Sanders pointed to the fact that fertile ground” for terrorist groups such as Daesh and al-Qaeda in the Arabian Peninsula (AQAP) to further grow in the impoverished country and “deepen” their presence there was causes by the chaos in Yemen, aggravated by the Saudi-led military coalition, “.

There are alot of interest we share with Israel:Saudi crown prince