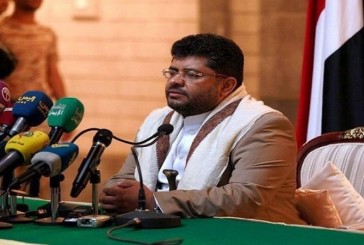 Head of the Supreme Revolutionary Committee, Mohammed Ali al-Houthi, on Monday considered the military escalation of Saudi-led coalition an attempt to hinder any talks aimed at stopping the war and bringing peace.

“This escalation is evidence of the falseness of US statements demanding an immediate cessation of hostilities, while it is the actual commander in the war ” al-Houthi said in a statement.

He added that when the coalition countries failed to achieve any victory in the western coast, they started to bomb the residential neighborhoods in Hodeidah city committing new massacres against civilians, including women and children.

“It was customary to have a military escalation following any US statement of peace or talk about the humanitarian side,” al-Houthi added.

Al-Houthi held the US, Saudi Arabia and the United Arab Emirates and their allies in the aggression responsible for the heinous crimes that have been and may be committed.