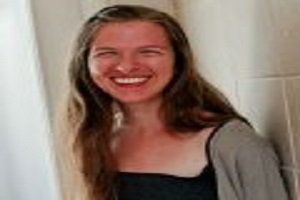 The United Nations Population Fund (UNFPA) recently warnedthat as many as 1,500 pregnant women in the besieged Yemeni port city of Hodeida are at risk of death now that the city’s only hospital capable of providing emergency care services has become inaccessible due to the fighting.

In a statement issued Wednesday, UNFPA’s Director for the Arab region, Dr. Luay Shabaneh, wrote that the agency feared that:

Among the 10,000 pregnant women caught in the fighting in Hodeida City, the lives of an estimated 1,500 who are likely to encounter complications during pregnancy and childbirth might be at risk as the city’s only hospital [al-Thawra hospital] that can provide emergency care becomes inaccessible.” 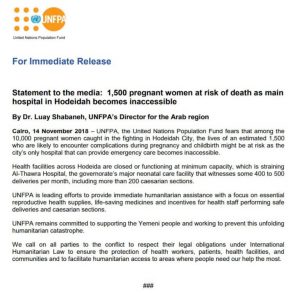 Shabaneh went on to note that the al-Thawra Hospital has been forced to take on the majority of Hodeida’s civilians in need of medical assistance because “health facilities across Hodeida are closed or functioning at minimum capacity,” while others have been captured by the Saudi-led coalition. As a result, the hospital’s neonatal care facility sees 400 to 500 deliveries per month, including more than 200 caesarian sections.

Without access to the hospital, over a thousand women likely to need caesarian sections, or other emergency care relating to childbirth and pregnancy complications, now face the risk of life-threatening complications, not to mention the risk to their unborn children.

Though fighting in the area seems to have temporarily halted after the Saudi/UAE coalition announced a ceasefire on Thursday in response to international pressure, the Yemeni resistance movement Ansar Allah (Houthis) has not confirmed the ceasefire. Furthermore, regional reports have suggested that the group is “prepared to continue fighting” the coalition, meaning that heavy fighting could resume at any time. In addition, at least two of the three roads leading to the Al-Thawra Hospital remain blocked, resulting in the fact that the hospital has limited accessibility to civilians despite the temporary lull in fighting.

Should hostilities resume – which seems inevitable at this point – the hospital itself may well find itself under attack, in light of the fact that it was targeted by coalition airstrikes earlier this week. Indeed, the hospital was evacuated this past Sunday after coalition airstrikes were launched so close to the facility that they shook the building. Hundreds of medical workers and patients, including a malnourished woman carrying her daughter in a surgical robe and a man hooked up to a catheter, were forced to flee and dodge a hail of shrapnel as they sought shelter elsewhere, according to eyewitness accounts. The hospital also came under attack from the coalition in early August, killing 26.

In addition, the coalition’s documented tendency to bomb civilian infrastructure in Yemen, including hospitals and clinics, does not bode well for current and would-be Al-Thawra patients.

The hospital’s horror as microcosm of nationwide humanitarian disaster

While the recent UNFPA statement warned of the dire risk to as many as 1,500 soon-to-be mothers in Hodeida, the horrific situation is a microcosm of the situation for Yemeni mothers throughout the country. Earlier this month, UNFPA warned that the health and well-being of 1.1 million malnourished pregnant and breastfeeding women were at risk. This extraordinary situation was already resulting in “numerous cases of premature or low-birth-weight babies, severe postpartum bleeding, and extremely life-threatening labor processes.” At the time, the UN agency warned that any worsening of the situation would result in that figure increasing to 2 million Yemeni mothers.

The plight of Yemeni mothers is the result of the brutal humanitarian crisis that has resulted from the coalition’s three-year war against Yemen as well as its year-long blockade of the country, which has blocked crucial imports of food and medicine. The result has brought an estimated 18 million Yemenis to the brink of starvation and resulted in the worst cholera outbreak in modern history, as well as a proliferation of cases of other preventable yet deadly diseases.

The battle for Hodeida, which was reinitiated by the coalition in June after it failed to take the city last year, is a flashpoint for the crisis, as the vast majority of crucial imports into Yemen pass through the port city. The offensive has exacted a brutal toll on Hodeida civilians — with civilian deaths in the area rising by 164 percent and at least 50,000 people displaced since the offensive began. The fierce fighting in the crucial port city has only exacerbated the dire situation throughout much of western Yemen, which is widely believed to be the world’s worst humanitarian crisis.

The Dying Children of Yemen

Army spokesman: enemy failed in his attempt to infiltrate toward Hiran from three tracks