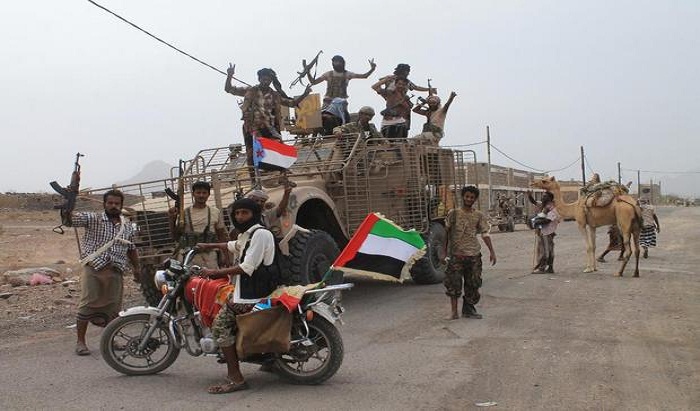 Four years ago, the UAE suffered in Aden,southern Yemen, when the Yemeni government under popular pressure canceled a contract in which it enabled DP World, which operates more than 70 ports around the world and owned by the emirate of Dubai, to run Aden port , including the port of “Maala” and the “Caltex” containers for the next hundred years,and it is an agreement signed by the former Yemeni President Ali Abdullah Saleh in 2008.

The canceled deal was scandalous at all levels ,not only because of its duration, not even because of commissions and bribes received by Saleh and his regime to pass it, but more importantly because the deal was an implicit endorsement of Yemen’s right to manage its most important ports for a rival country. Due to its strategic location and depth of water, which allows the reception of larger container vessels and a stable ridge that has made it an ideal location for refueling, Aden Port has been the primary competitor to Jebel Ali and Rashid ports, the two most important and strategic ports in the UAE.

The approaching of battles in Aden coincided with Abu Dhabi’s concerns about the risks of its economic ambitions in the Horn of Africa as well as its emerging agenda to highlight its military power directly in the region itself, prompting the emirate to change its view to the Saudi coalition. A shift coincided with a Saudi need for more effective military engagement after failing to persuade Pakistan or Egypt to send ground troops.

By August 3, 2015, the UAE-led forces were advancing into Aden, controlling the Al-Anad airbase northwest of the city, which turned to be the headquarters of the UAE forces and their allied local paid fighters, which means that Aden had returned to UAE grip , but this time it is not through an agreement to manage the port but through an actual military presence, it seems that its lowest target today is simply to regain economic control of the port of Aden while other targets are growing behind it.

At the time when the UAE was establishing its influence in Aden, it was investing at the same time its assets in Eritrea on the other side of the Bab al-Mandab strait. The incident seemed normal in the second half of 2015, when DP World entered into a rent  contract to develop Asab porton the the Red Sea. Over the following months, the UAE was strengthening its military infrastructure in Asab, forming its first military base outside its border arounf the port , including ready aerial roots to deploy a full group of French-made Mirage 2000 aircraft, or C-17 and  C-130s , belonging to the UAE Air Force, as well as a large ground unit as the size of an armored battalion equipped with French Liqueur tanks and training facilities for local Yemeni paid fighters or even foreign forces before being transferred to Yemen.

By early 2016, the Asmara airport in Eritrea, which was also being developed by the UAE, was receiving Apache helicopters from the UAE Joint Aviation Command, as well as the Chinook and Black Hawk helicopters of the UAE Presidential Guard for unknown operations in Yemen and theyalready for the first time carried out attacks on the “Strait of Bab al-Mandab” from “Asab”. The new pilots of the Yemeni Air Force were trained on helicopters given by the UAE. Training in ‘Asab was also carried out before they were transferred to Anad air base in Aden, which is subject to UAE control. Thousands of Yemenis trained by Abu Dhabi were also sent to Aden with full battalions of Eritrean, Somali and Sudanese fighters who all work under UAE leadership in the Yemeni coastal city.

Dispute over the port of “Duraleh” in Djibouti

Dubai Ports Company has a third stake in the port of Doralia, for which it has been in dispute for six years with the government of Djibouti over who is entitled to manage the port. But months ago, after the government of Djibouti announced the nationalization of the container terminal, UAE got angered and the company said that it will continue to take “all legal measures” to defend its rights in its ongoing dispute with Djibouti over the port of Doralje, which is one one of Africa’s largest container ports. The move comes after Djibouti announced the nationalization of the share of “Port of Djibouti” in the port, amounting to two thirds.

According to Djibouti officials, unfair conditions in the contract are preventing the expansion of the port buildings or the constructing any new buildings and the agreed ownership quotas were not the same in the distribution of profits as well as making the financial management in the hands of Jebel Ali Ports Group DP World, In the yield ratios as the UAE company acquired more than its share.

Moreover, Djibouti later discovered that 20% of the profits went to the former Djiboutian Ports Manager (the Djiboutian official in charge of  the deal ,who lives in Dubai) Abdulrahman Buri and DP World Chairman Sultan Ahmed Bin Saleem, forcing the Djibouti government to raise a case to return its right in 2012, and it also moved to Abu Dhabi, which told it that this matter belongs to the Government of Dubai and has nothing to do with it.

At the same time as the UAE was intensifying its activities in Aden and Asab, Abu Dhabi has also expanded its partnership with the national security and intelligence services in Somalia by opening a new training center for Somali commandos under the supervision of the UAE Special Forces. In addition to providing Somali security forces with armored personnel carriers, water trucks and motorcycles for the Department of Homeland Security, it pledged to pay salaries of government security forces for four years.

In April of this year, Puntland region , the semi-independent Land in northeastern Somalia ,signed a 30-year concession with DP company to develop and manage a multi-purpose port in Bosasso in two phases at estimated cost of 336 million dollars. The signing of the deal came just weeks after the signing of a deal with the Somaliland or Somaliland region that would also allow the UAE to establish a military base at the port of Berbera. Last year, Somaliland announced a deal of $ 442 million with world DP company to upgrade the port in Berbera and establish a regional trade center on the Red Sea coast.

Exaggerated Emirati interest in Socotra has sparked many speculations, especially after leaking information about preparations to link the island to a UAE telecom company and declaration of Union aviation , belonging to the Abu Dhabi, to allow three weekly flights between the UAE capital and Socotra, which is considered as Exaggerated concern compared to the size of activity on the island and that Abu Dhabi does not allow regularly flights with Aden itself, which are moves that the resigned Yemeni president Hadi’s office in Riyadh to warn of “the UAE’s ambitions on the island.”

There are , in addition, two projects announced by the UAE on the island.The first is the construction of the Socotra airport and its accompanying tourist infrastructure, which will require the displacement of a large part of the local population and perhaps the expulsion of people from the most desirable places for western tourists. The second project is the establishment of a special military base in Yemen to house 2,300 Yemeni soldiers from the archipelago who will be transferred to the UAE for training before being sent back to the islands to head a local military task force.

Military sources confirmed that there is a major military plan of the coalition on the verge of implementation aiming at destroying the port of Hodeidah, in the coming days after its failure to achieve any progress in the field to control it through the fighting on the West Coast Front.

The sources said that the countries of the coalition sent a number of cranes to operate the ports of Aden and Mukalla as alternative to the port of Hodeidah , which arrived yesterday afternoon.

The sources suggested that the forces of coalition may destroy the port of Hodeidah in the coming days after they destroyed all the ports in the southern provinces, as stated by the head of the Riyadh delegation participating in the consultations of Sweden Khalid al-Yamani during emphasising on the military solution in a sign and a clear indication of their lack of seriousness and desire to achieve peace.

A new incinerator for dozens of Saudis and their paid fighters in less than 10 hours in Asir ,Najran