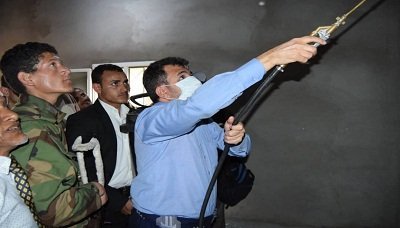 Minister of Public Health and Populations, Taha al-Mutawakel, along with Hodeidah Governor Mohammad Qaheem launched on Tuesday in Kadan area of Dhouha district the second stage of the spraying campaign to combat cholera.

During the launching of the campaign, al-Mutawakel stated that the campaign executed by the National Program to Combat Cholera during 11 days will cover 26 districts in Tihama region, including Kamaran Island and it aims to eliminate several epidemics.

The campaign, which targets 548 people, is included in the framework of his ministry’s strategy to combat cholera, dengue, he added.

The Deputy minister of Public Health for services sector Abdul Aziz al-Dilamy confirmed that 388 A mosquito net, saturated with insecticide, with the support of the World Health Organization, will be distributed later.

US Blamed for Yemen’s Tragedy, Under a Saudi-Led Implementation: NYT