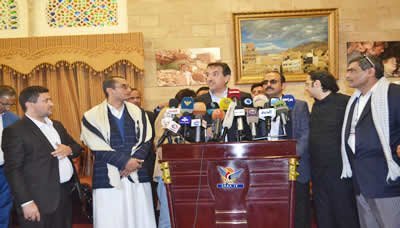 The national delegation headed by Mohammed Abdulsalam arrived to Sana’a on Friday afternoon.

The delegation was received by Ahmed Hamed, head of the Presidential Office, head of the Supreme Revolutionary Committee, Mohammad Ali al-Houthi, Hamoud Obad and a number of senior political and military figures.

After his arrival at Sanaa International Airport, the national delegation held a press conference in which the deputy head of the delegation, Maj. Gen. Jalal Al-Ruwaishan expressed his gratitude toward the United Nations, represented by Secretary-General Antonio Guterres and UN envoy to Yemen Martin Griffith, for their efforts to hold the first round of these consultations.

“We thank the Secretary-General of the United Nations and the UN envoy for their great efforts to hold consultations, and we thank the State of Kuwait for its logistical support for the national delegation and support and ensuring the transfer of the delegation from Sanaa to Stockholm and returning safely, ” he said.

He also referred to the role of the Kingdom of Sweden in organizing and fully sponsoring such consultations.

Al-Ruwaishan noted that the consultations focused on four files, the political framework, the security and military arrangements and confidence-building measures that were distributed between the economic file, the issue of Hodeidah, Taiz, Sana’a International Airport and salaries.

He considered the participation of the national delegation in the consultations of Sweden a first step on the path of peace for the Yemeni people.

“We have sent a message to the world that we are with peace and we seek peace with sincerity, transparency and clarity. This is a testimony we presented during our meeting with the ambassadors of the five permanent members of the UN Security Council, the UN Secretary General and the British Foreign Secretary, who praised the peace initiative presented by the delegation, “he said.

“As for the results, the consultations on the first round are often insufficient and a final outcome can not be achieved, but I assure you that the consultations put the first steps on the road to peace and improving the humanitarian situation. The world is fully aware that the humanitarian tragedy in Yemen is unprecedented in modern history. “he said.

“Our objective from these consultations is to prove to the world that we are moving in three directions. The first is that we are steadfast and we can confront whatever difficulties and hardships. The second direction is to extend our hands to peace with our brothers first and then with the world and the third is that the human catastrophe in Yemen has reached a level of danger and the international community so should move.

He pointed out that there is another round of consultations but their timing and location have not been determined yet.

“We have made a commitment to the United Nations, the international community and the five permanent members that the concerns expressed by the other side of the opening of Sanaa International Airport will be the responsibility of removing them all,” said the deputy head of the national delegation.

He added that “we offered the United Nations supervision in the aspects of security and safety at Sanaa International Airport as well as aspects of the flow of information about each movement at the airport, but the other party impeded the agreement for psychological reasons, not political nor logical, and this is confirmed by the testimony of the international community.”

He also hailed the efforts of the United Nations and its Special Envoy to Yemen and the Kingdom of Sweden on the positive arrangements for holding the first round of consultations in Sweden. He praised the role of the Sultanate of Oman, Kuwait, the Yemeni people, who supported the national delegation during the consultations as well as the national media.